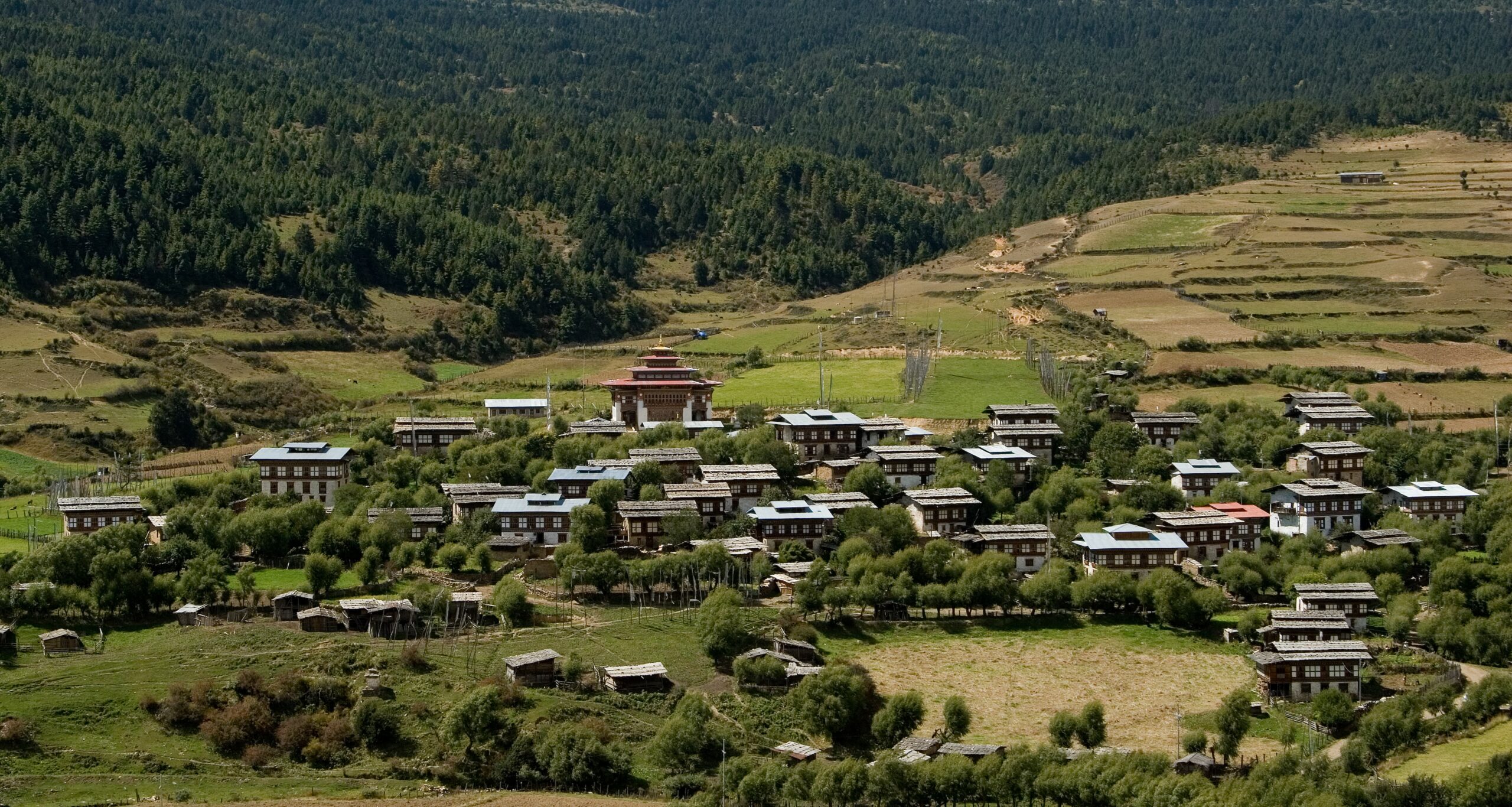 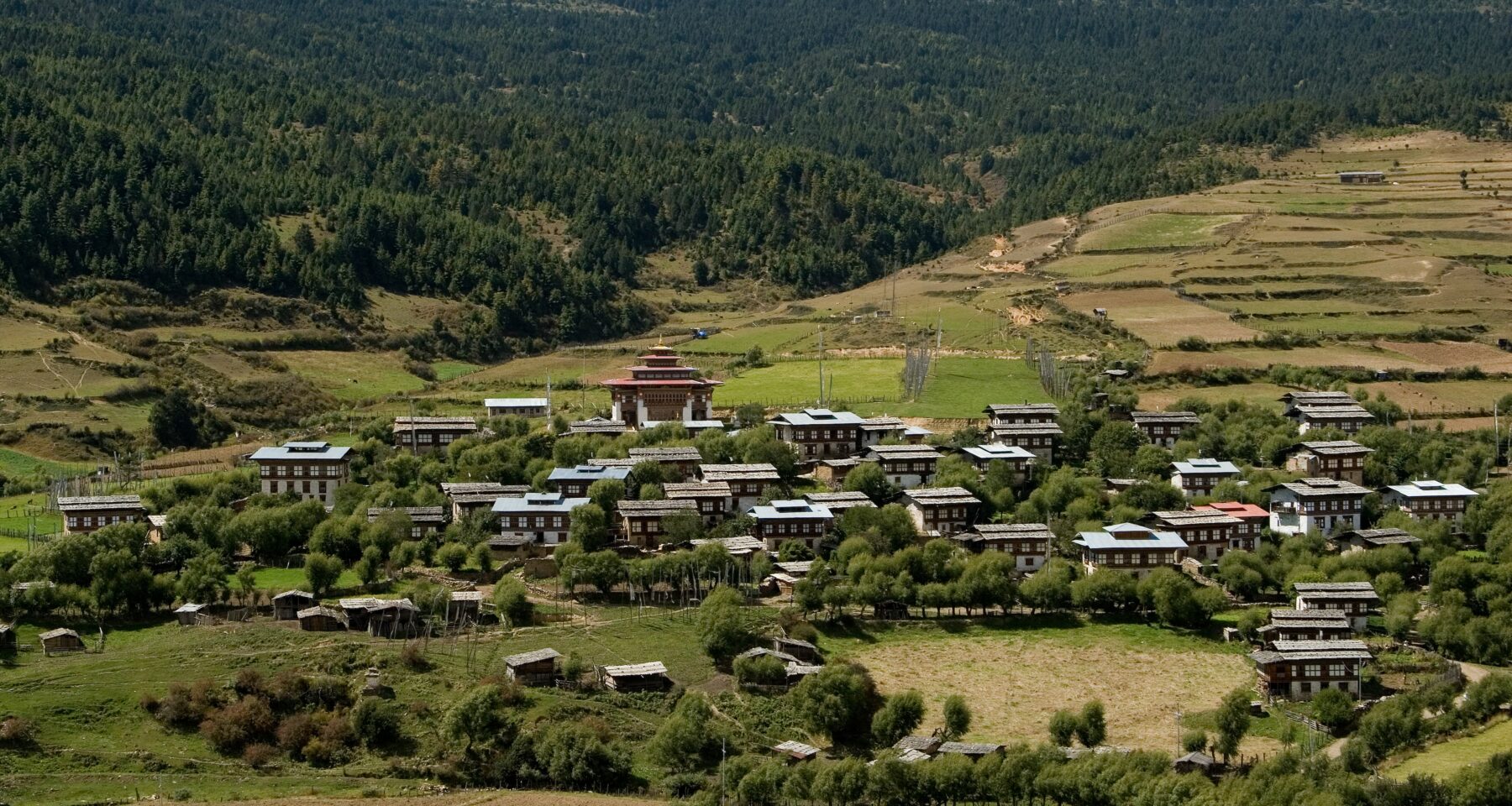 After
breakfast, drive to Punakha – approximately 3-hours drive through picturesque
valleys and mountain slopes dotted with typical Bhutanese villages. From the
Dochula pass, at over 10,000ft, vast panoramic views of the high snowcapped
peaks of the Bhutanese Himalaya can be enjoyed on a clear day. Continue drive
down into the Punakha valley. On the way visit Chhimi Lhakhang – This was founded in 15 Century by Lama Dukpa
Kinley also known as divine mad man. It is half hour walk across a local
village and rice field. After lunch visit Punakha
Dzong – built in 1637 by Zhabdrung.  Overnight
at hotel.

After breakfast, drive to Phobjikha.  Visit Gantey
Goenpa as it is a major attraction with an old monastery dated back to the
16 century. Later, walk around the valley which is also the winter home to the
rare black-necked cranes.  Which migrate
from remote parts of Tibet, China and Siberia during winter to this valley.
Overnight at hotel.

After breakfast drive to
Chumey.
On the way visit Trongsa
Dzong – seat of the district administration, built in 1648. And visit Tower of
Trongsa, which has been converted into a museum from a watchtower that once
guarded Trongsa Dzong. Continue drive to Chumey. Overnight at hotel.

After breakfast visit yathra weaving central. Which Yathra are made into colourful scarves,
bags, blankets and sweater. Visit Tharpaling monetary and hike till Kikila pass, which is about 4
to 5 hours hike. Drive to Bumthang.  Overnight
at hotel.

You will explore our
neighboring palace, Wangdichhoeling, a past home to the 2nd King, and now home
to the auspicious prayer wheels next door. Heading up valley, you will take in
the grand Kurjey Lhakhang,
considered one of Bhutan’s most auspicious monuments, that was once the resting
place of Guru Rimpoche, and Jambay
Lhakhang, home to the early winter festivals that draw thousands of
Bhutanese for their annual blessings. Heading back into town and across the
Bumthang Chhu, you will enjoy a visit to the sin alleviating Tamshing Monastery followed by quick
visits to the valleys unique cottage industries – Red Panda Brewery, Bumthang
Cheese/Dairy Facility and the Bumthang Distillery, home to numerous distinctive
spirits.

Drive up to
Tang valley and visit the mystical Ugyen
Choling Palace.  After lunch drive back to Bumthang on the way take short
walk on the riverside to Menbar Tsho (the burning lake).  Overnight at hotel.

After breakfast, fly to Paro. Duration of flight about 30 minutes.  On arrival at Paro.

After
breakfast, drive for half an hour and start the hike, which is about 5 hours
(round trip.) The trail is along an ancient path marked by river-powered prayer
wheels. As you reach Taktsang you will be struck by the architectural wonder of
this most pious Buddhist shrine in Bhutan. Perched some 1000m, 3000ft on a
cliff overlooking the valley; it would justifiably qualify as one of Bhutan’s
wonders. Tragically wrecked in a fire early in 1998.  It has been rebuilt to its original glory. It
is said that the legendary Indian saint, Guru Padma Sambhava, flew from Tibet
on the back of a tigress to tame five demons, who were opposing the spread of
Buddhism in Bhutan in 746 A.D. Hence the name, Taktsang, or the “Tiger’s Lair.”

Descend
back to Ramthangka. If the time permits, drive further north to visit another
symbolic structure, which is now under reconstruction. Drugyel Dzong, or
“”Castle of the Victorious Drukpa,” which was also built by the Shabdrung to
commemorate Bhutan’s victory over the Tibetans in the 16thcenturies. From here,
the Jomolhari Peak (“Mountain of the Goddess”) can be seen on a clear day (Alt.
7,329m/24,029ft.).  Overnight at hotel.