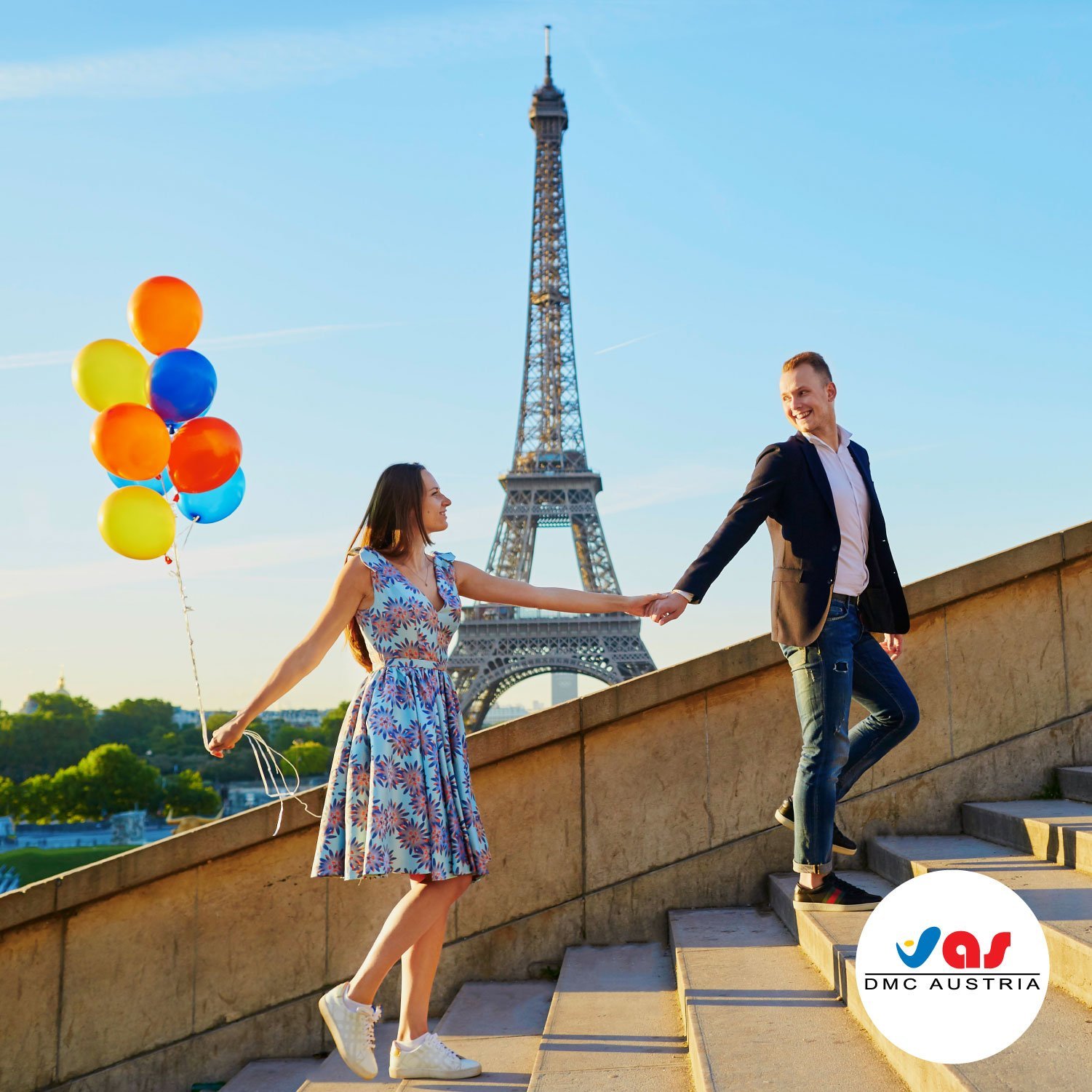 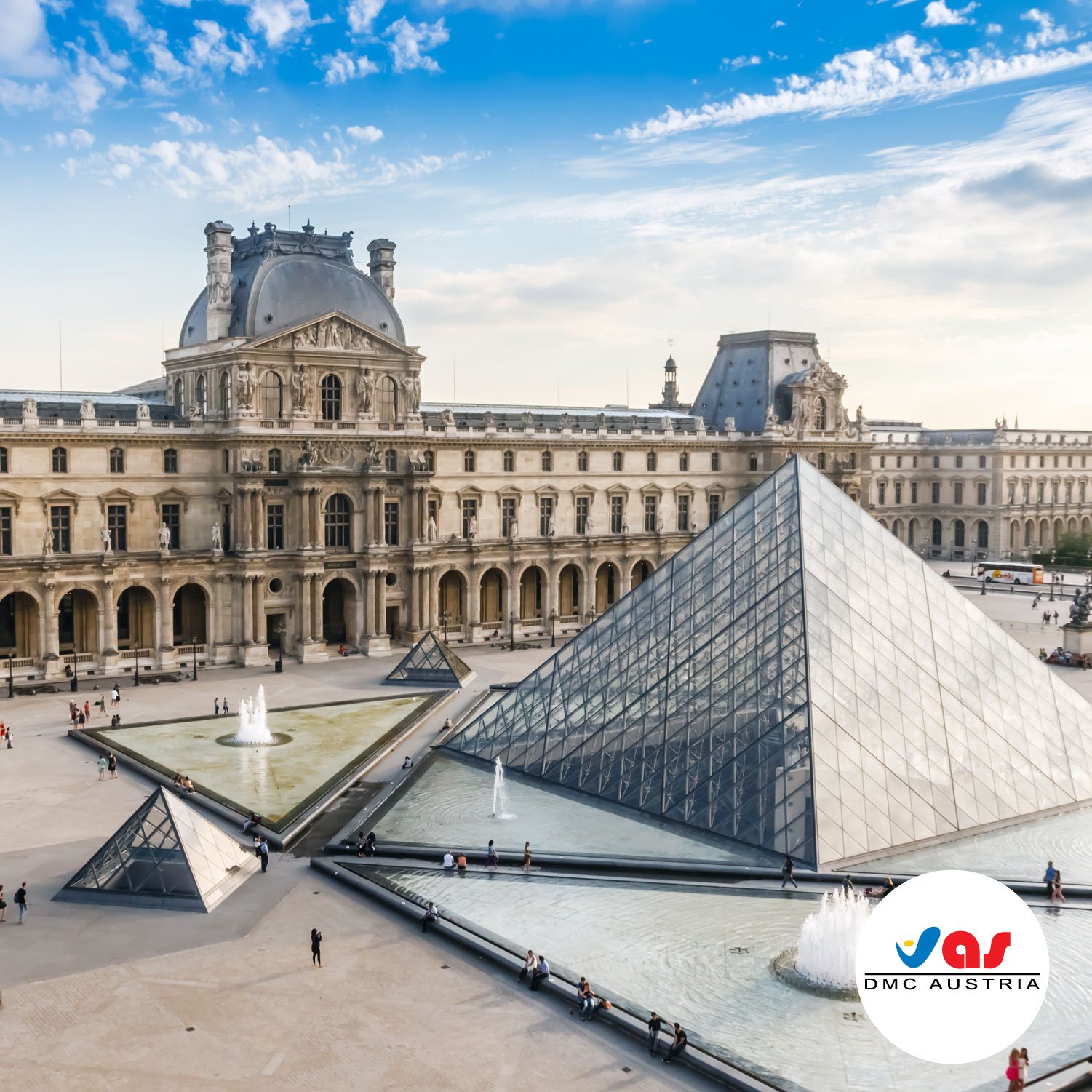 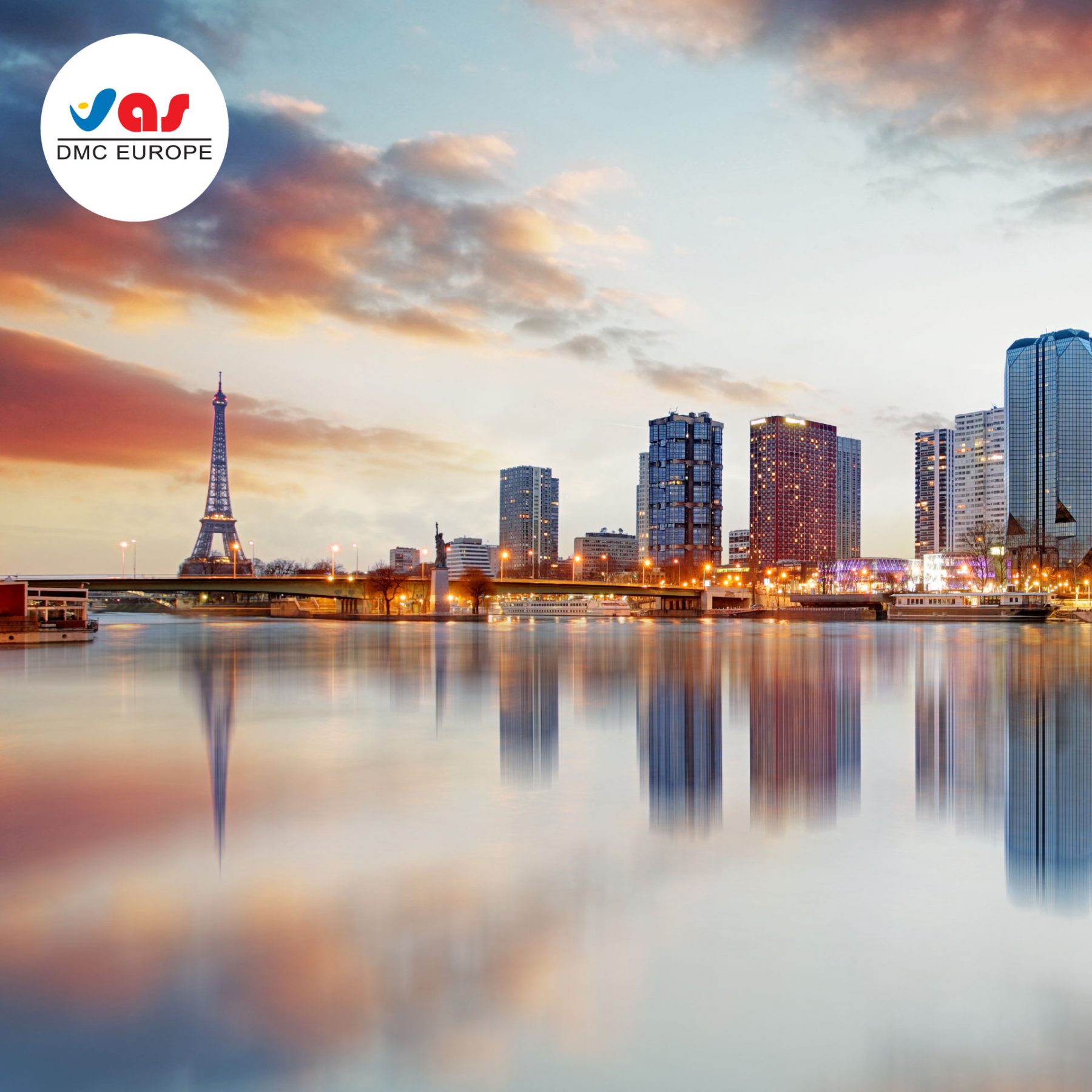 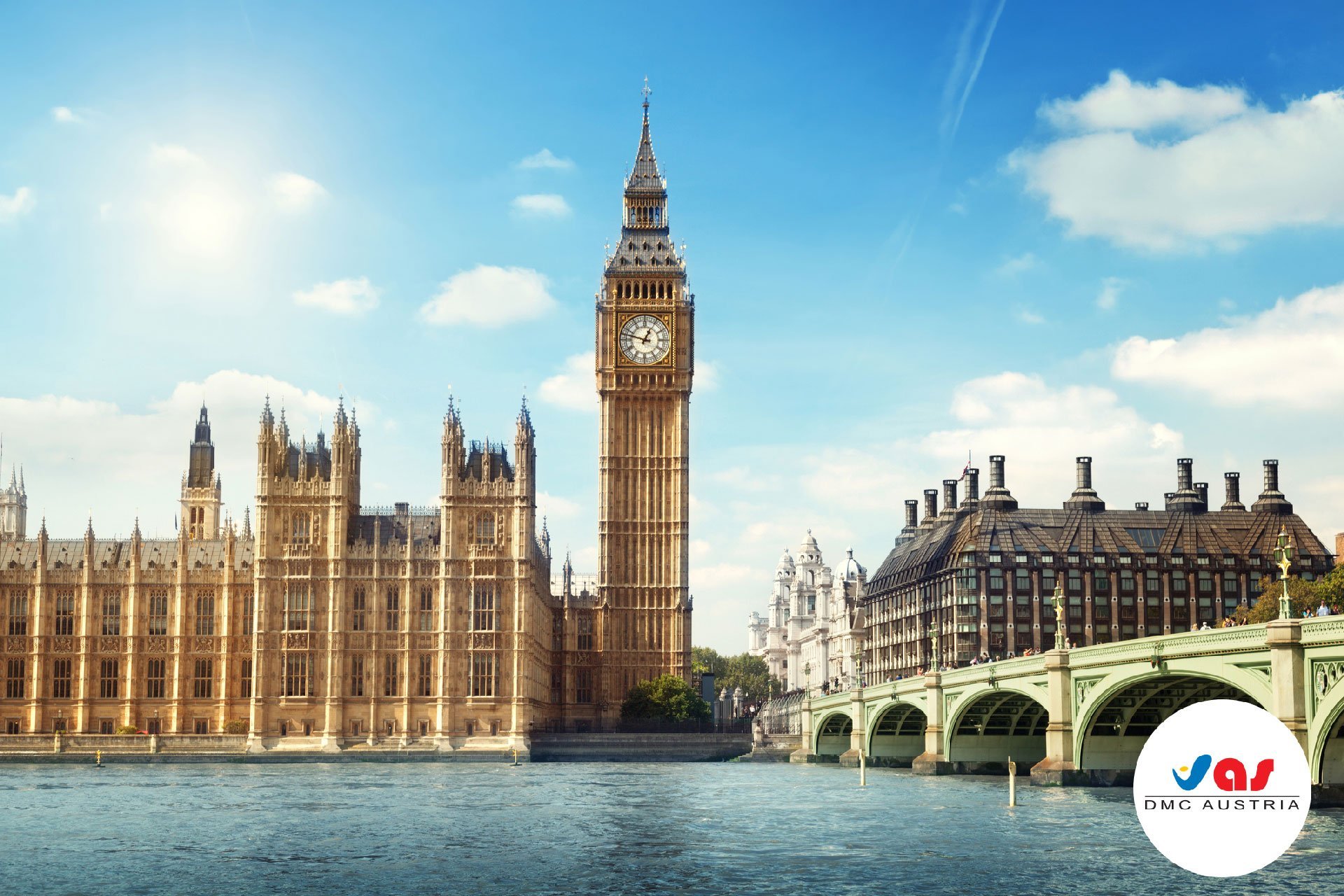 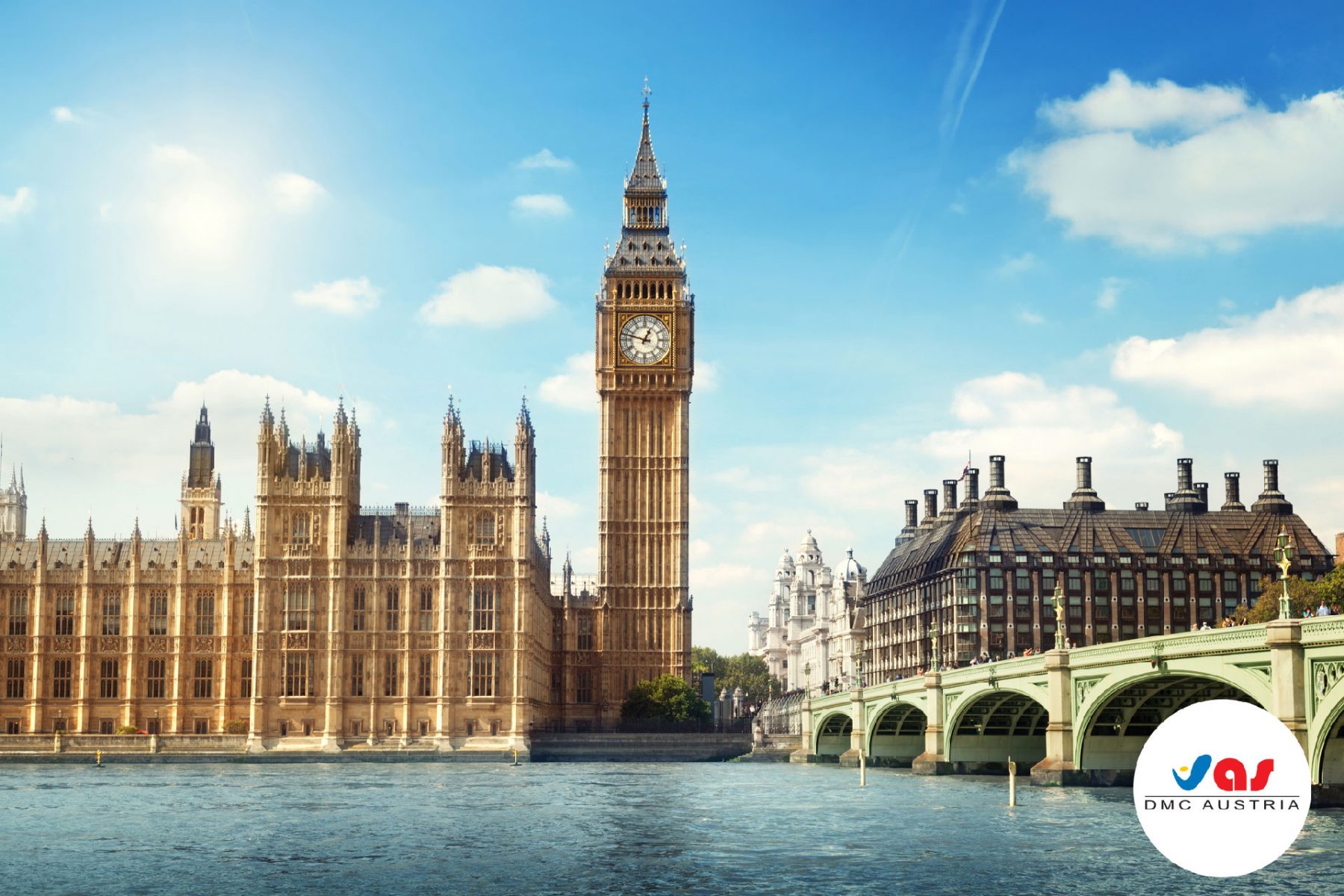 Arrival in Paris and transfer to the hotel.

Buffet breakfast and departure for a panoramic tour of the city.

Explore the Île de la Cité and Montmartre, discover the most emblematic sites such as the Louvre Museum, the Eiffel Tower, the Opera Garnier, the Arc de Triomphe or the Musée d’Orsay, stroll through the Latin Quarter and the Avenue des Champs Elysées and be thrilled at the Notre-Dame
Cathedral.

Breakfast and departure to Chartres to visit its cathedral. Jewel of French Gothic, built between 12th – 13th centuries, with a set of stained glass windows from 13th century, which has a unique shade of blue in the world.

Continuation to Orleans, scene of the coronation of French kings in the middle Ages. Its historic center is dominated by a statue dedicated to Joan of Arc, who led the French troops against the English army during the attacks of the Hundred Years’ War, and the late Gothic Cathedral of
the Holy Cross.

Arrival in Tours and overnight.

Visit of the city of Tours, historical capital of France under the reign of Louis XI and starting point to visit the famous Loire Castles.

Leaving Tours we approach the castles of Chenonceau and Azay le Rideau. From the 16thcentury, Chenonceau is surrounded by a water moat and its grounds include several gardens, a park and a
plantation dedicated to the cultivation of vines. Azay le Rideau began its construction in the 15thcentury and is one of the most popular castles in the area.  Arrival in Nantes, gateway
to Brittany, and overnight.

Breakfast and visit of Nantes to see the royal square, the cathedral of St. Peter and Paul and the castle of the Grand Dukes of Brittany. We will then head to the region of Brittany, whose Celtic origins are still visible today.

Stop in Carnac where the famous Forest of Carnac is located, supposedly the meeting point of the Celtic druids and whose prehistoric site with up to 3000 menhirs placed in single file is the largest
in the world.  Arrival in Brest and overnight.

Discover this port city that served as a military fort throughout history. Its ramparts, the Tanguy Tower, the castle and the Siam Street are its main attractions.  On the way to Saint Malo we will discover the fascinating Breton coast, with fishing villages, steep cliffs and medieval heritage.

Excursion to Rennes, capital of the Brittany region. Take a stroll through its 16th century historic center, with its narrow streets lined with half-timbered buildings; two main squares, both dating from the 17th century, where the Town Hall, the Opera House and the Parliament of Brittany are located; the Basilica of St. Sauveur and the Cathedral of St. Peter, among other monuments.

Free time to enjoy the city and return to Saint Malo.
Rest of the day at leisure, it is recommended to walk along the seafront along the ramparts surrounding the old town.

After breakfast, visit of Mont St Michel, which marks the border between Brittany and Normandy. Member of the UNESCO World Heritage, its Benedictine abbey dedicated to St. Michel has become a pilgrimage site as well as a tourist attraction. Gothic in style and modified throughout history,
the main attraction of this mountain is to become an island every time the tide rises.

We continue the tour to Cherbourg and Caen, two of the main scenes of the landing of Normandy and its battles against the German troops. Overnight in Caen.

Breakfast and brief tour of Caen to see its main attractions, such as the castle of William the Conqueror and the abbeys of St. Stephen and Holy Trinity, known as the Abbey of Men (St. Stephen) and the Abbey of Women (Holy Trinity).

Departure then to Le Havre, located on the banks of the Seine River delta. Largely destroyed by the attacks of the 2nd World War, the center was rebuilt in the second half of the 20th century, its Gothic and Renaissance cathedral was saved.

We continue to Rouen, baptized as the “City of a hundred bell towers” by Victor Hugo, and center of the French Gothic style. It is worth mentioning the Cathedral, usual protagonist of the paintings
of Claude Monet; the Abbey of Saint-Ouen, 130m high; the Church of Saint-Maclou; the Palace of Justice and the Great Clock. Overnight stay.

Departure to Calais, where we will board the Eurostar train to cross the English Channel and arrive in London, capital of the United Kingdom. Overnight stay.

After breakfast, panoramic tour of the city. On a driving tour discover Westminster Cathedral, Buckingham Palace, Hyde Park, and the Parliament with the famous Big Ben clock and the Tower of London Bridge, among other points of interest. Afternoon at leisure and overnight.