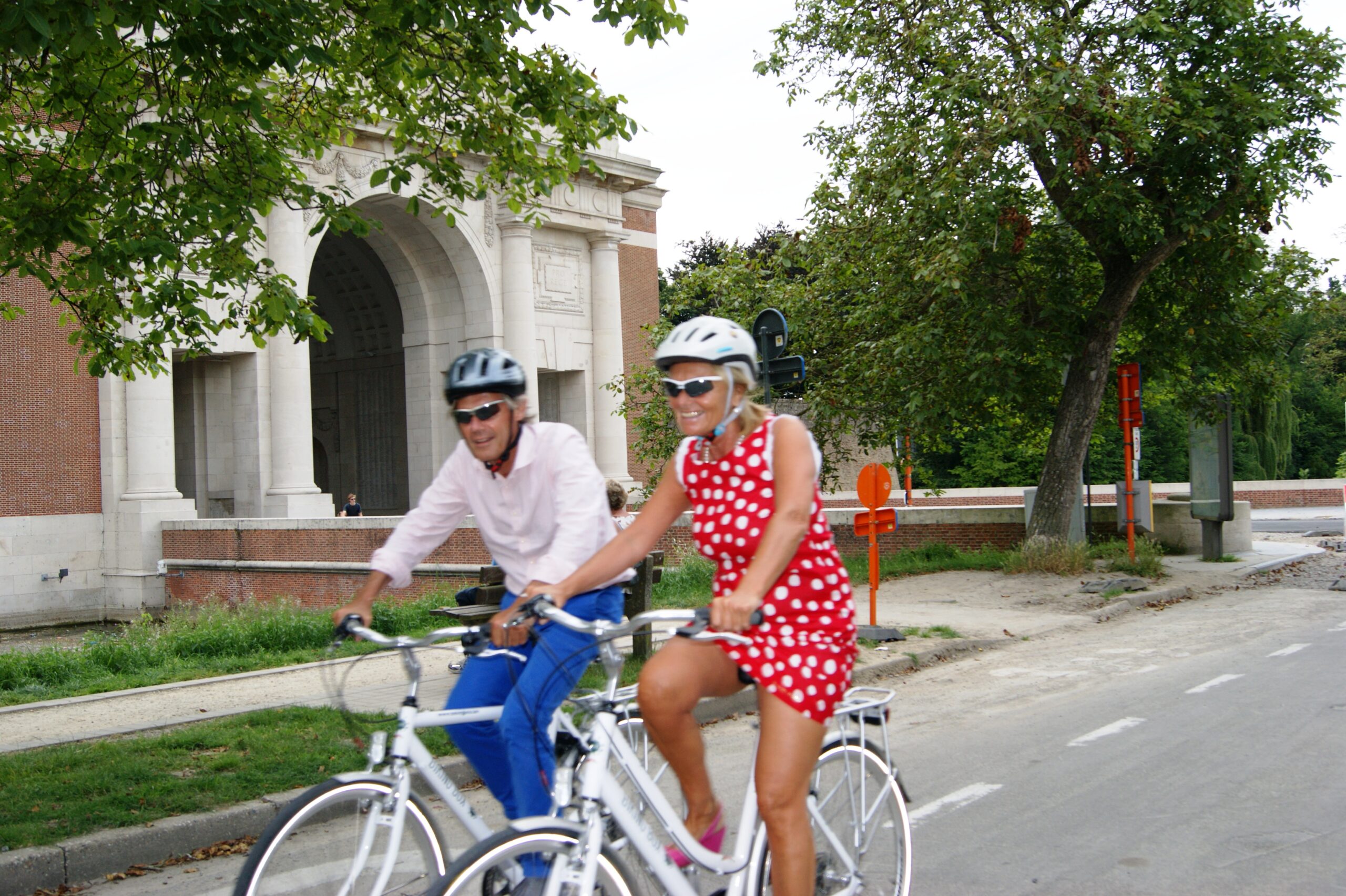 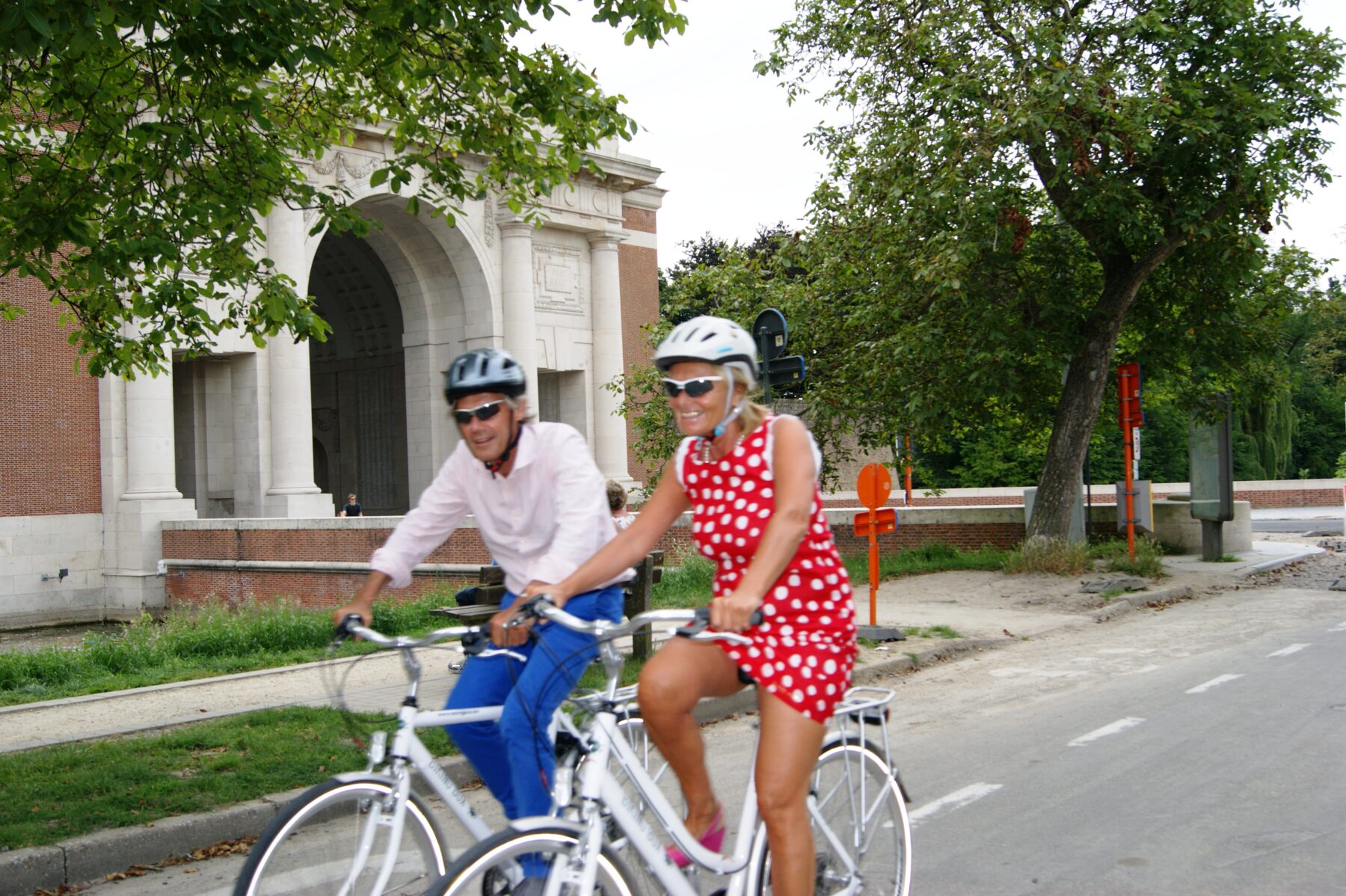 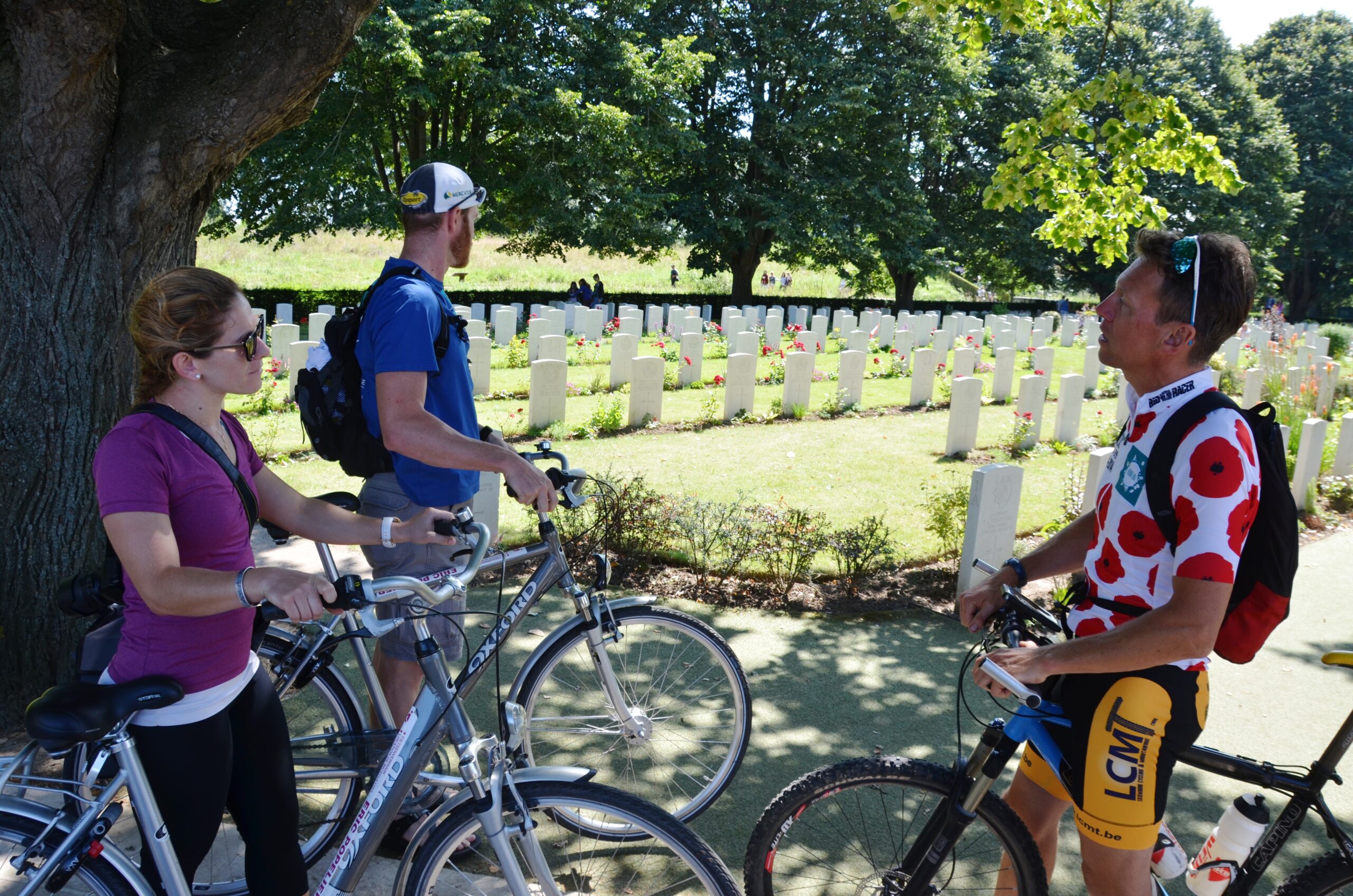 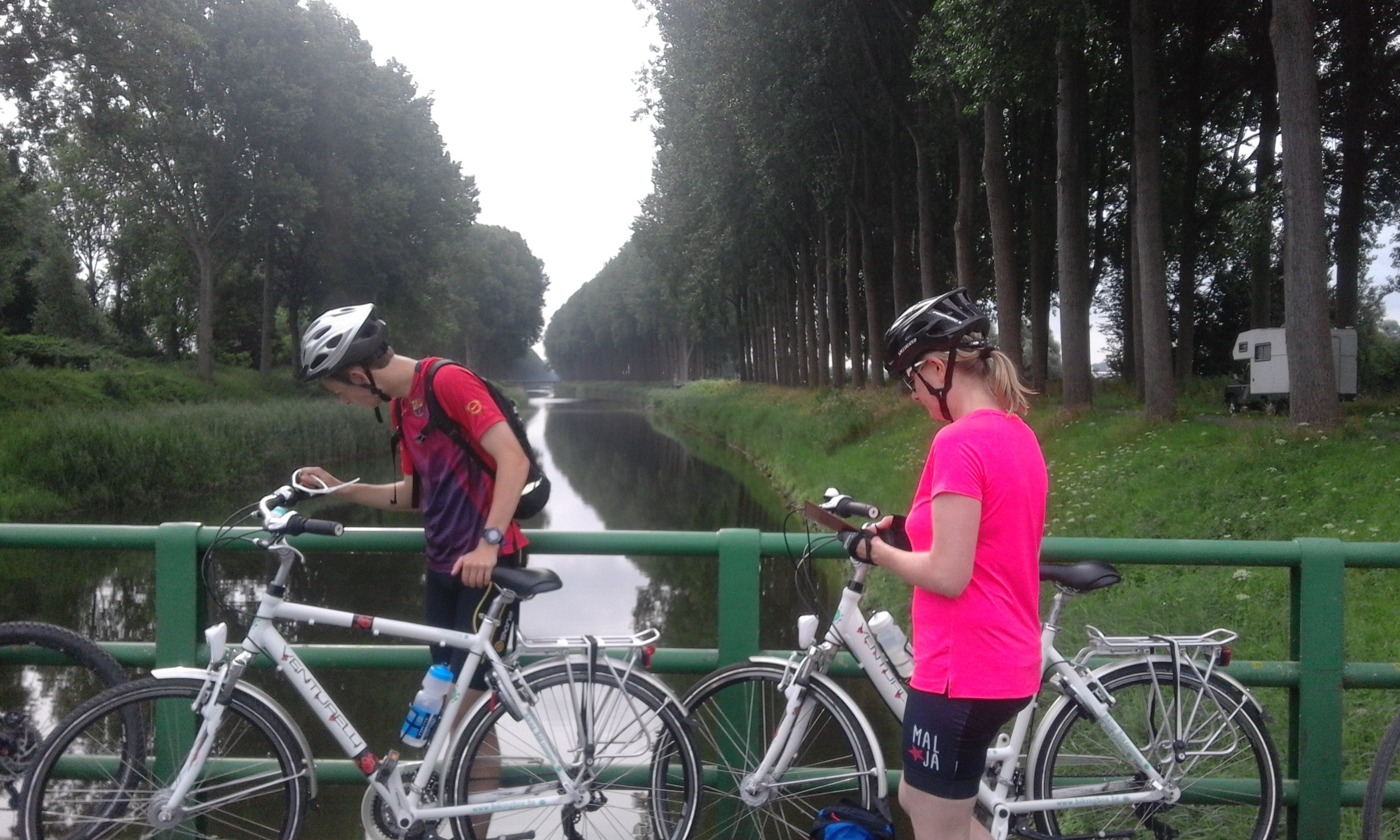 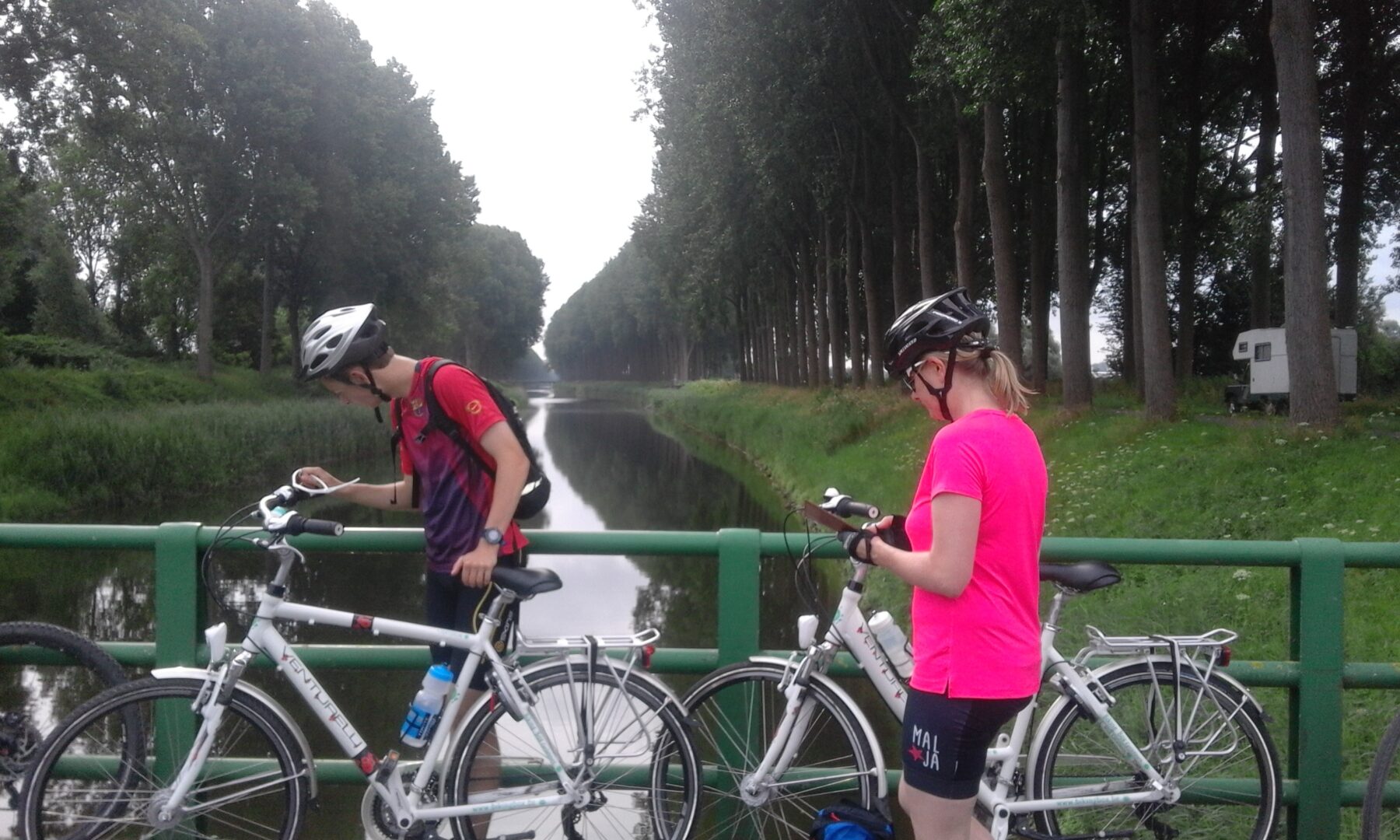 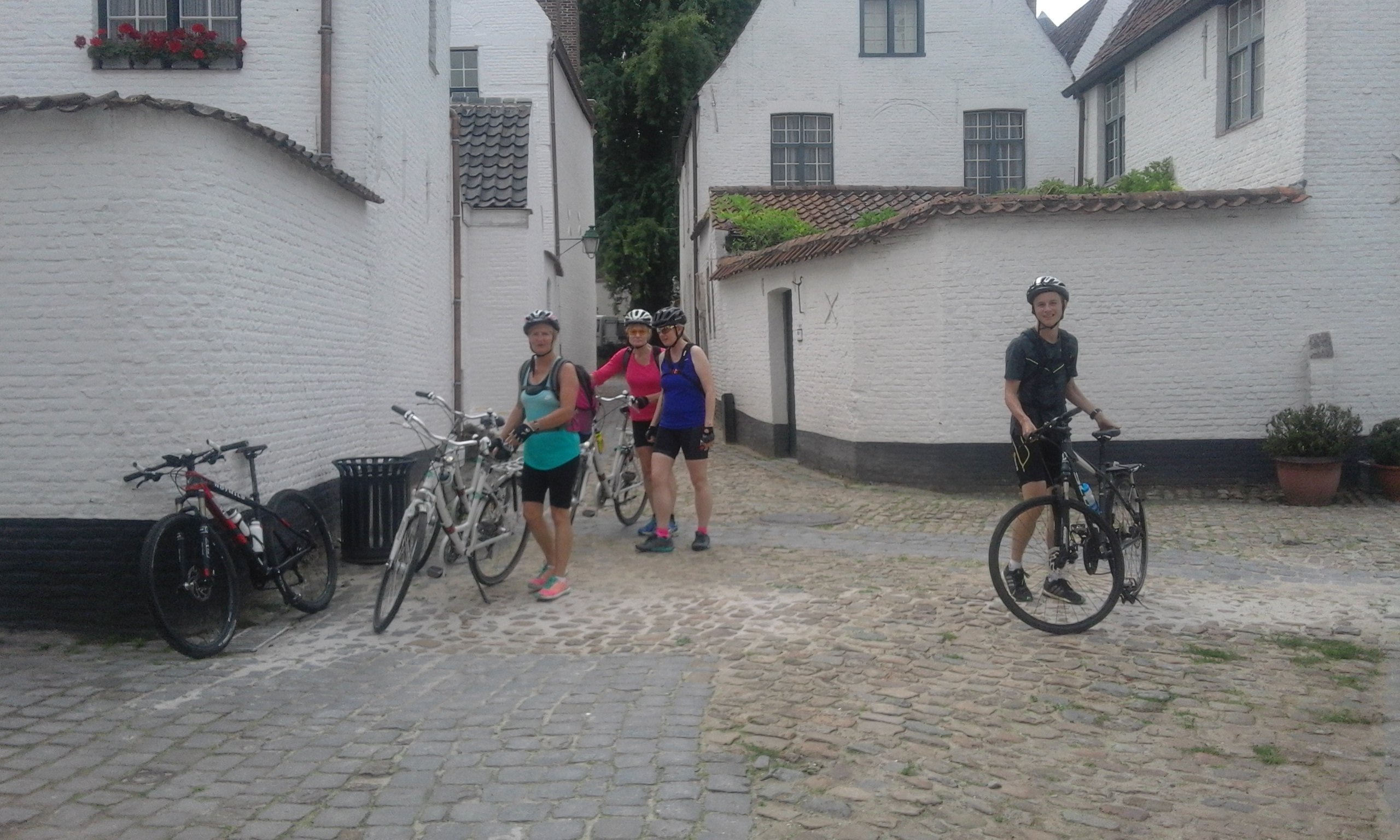 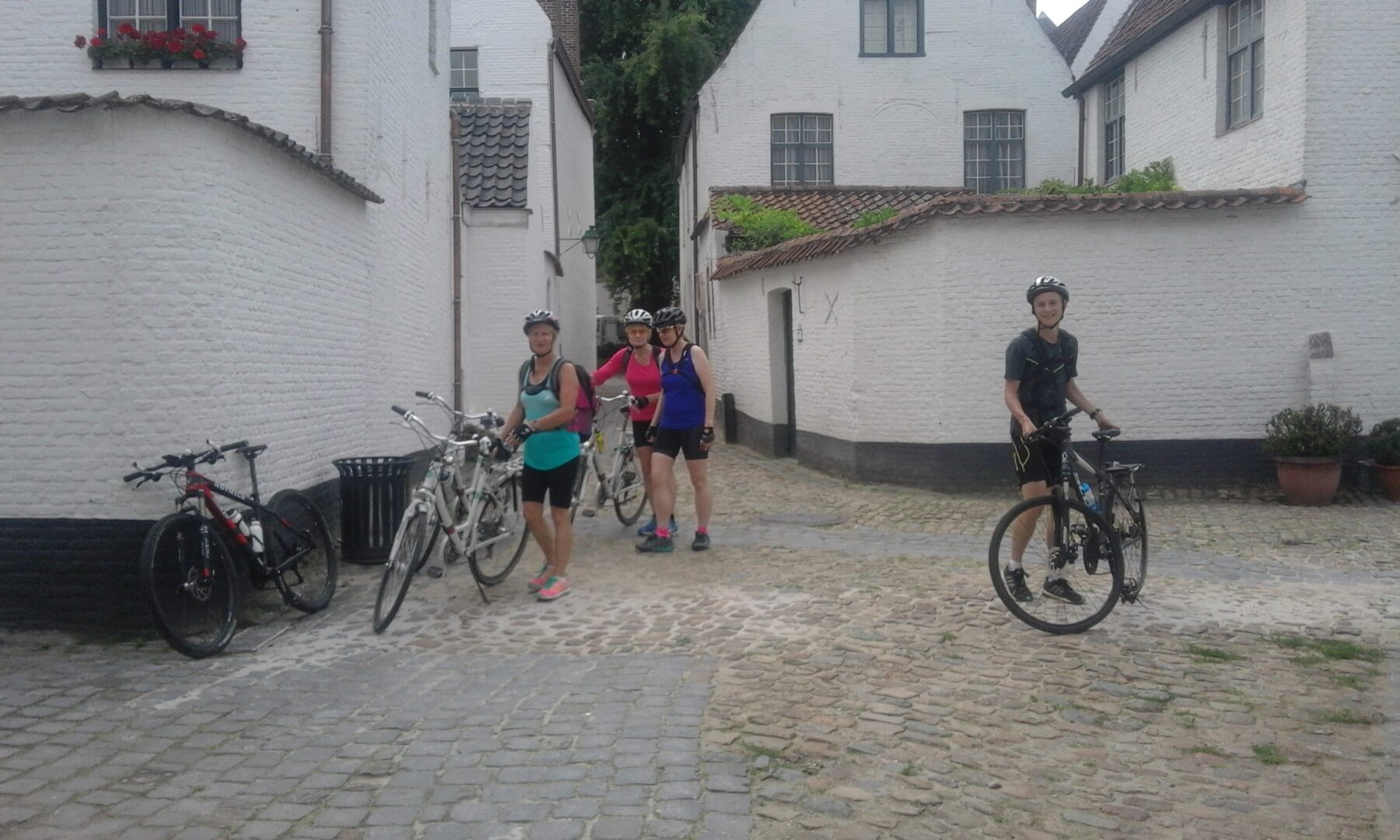 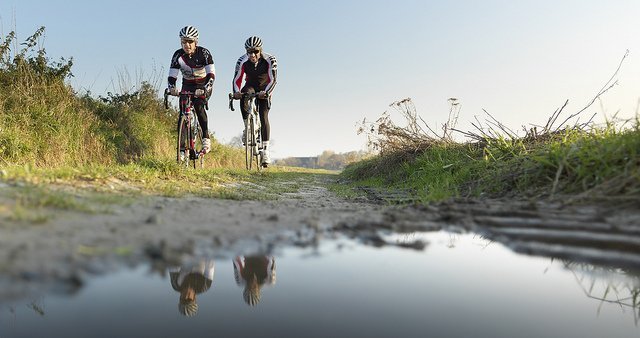 Day 1: BRUGES
Morning
Transfer Brussels airport – Bruges
Arrival in Bruges Installation at the hotel
Afternoon
Discovery of Bruges and surroundings by bicycle (18 km)
We cycle from Bruges along its many beautiful canals (called reien) towards the historical village of Damme.
Dinner and night in Bruges

Day 2: BRUGES – OSTEND (67  km)
buffet breakfast
Today we cycle from Bruges towards the Belgian coast with end in Ostend (Oostende) Leaving the Venice of the North, we will discover the beautifulness of ‘le Plat Pays’ as Jacques Brel once sang about. Leaving Bruges to the North Sea-coastline, we cross the polder land, up to Knokke and Zwin (optional extra = ‘Dutch’ town Sluis). In medieval times, the natural invading of the sea through the Zwin fairway, was one of Bruges most important strategic advantages, just far away from the open sea to be sheltered against spring tides and heavy storms. Now it is a paradise for birds and all who still can enjoy the rich and salty nature in this by sea formed dune and flood plain. In what follows today, you’ll have a look on the famous sea harbour Zeebrugge. You will also discover the beautiful Belle Epoque-style seaside resort De Haan. It was created in early 1900’s by King Leopold II. In 1933, Albert Einstein and his wife, had for a while their residence here after having left nazi-Germany. Finally we arrive in Ostend, Queen of Belgian sea-cities. Ostend has everything you can expect from a beach and harbour city, including nice shopping streets, fish-restaurants, a casino and of course a majestic railway-station that is directly connected with the ferries. We almost forgot to mention the fish mine,where from morning till evening fresh fish is offered, straight from the fishermen’s boats. Installation in the hotel in Ostend (Oostende) Free time to freshen up Before dinner we make a 2 hour walking tour through Ostden (Oostende) with a local guide
Dinner (3 course menu, drinks not included) is served in a typical restaurant with view on the North Sea
Night in Ostend

Day 3: OSTEND – YPRES (64  km)
Buffet breakfast Leaving Ostend in morning, when the beach is still (half) empty, you must enjoy the look on the endless variety of color tints that the North Sea can offer to its spectators. On our left side we still can see the remains of the Atlantik Wall, the defensive bunker line, that the German invader built to avoid any landing on the beach of the Allied Troops. A stop for a complete visit can be considered, but takes at least one hour and a half (decision to take before). We follow the coastline up to the Middelkerke Casino. Then we move up a bit more into the polder land, passing small fishermen’s towns of the past as Lombardsijde. This village also gave birth to a double cycling World Champion, Freddy Maertens, whose statue can be admired on our road to Newport (Nieuwpoort), once created by the medieval city of Ypres, to keep a closer entrance to the North Sea. From Nieuwpoort, you can follow indeed the Ijzer (Yser), a river who became famous because of its inundation during the Great War. We will follow as well this water today. The Yser leads us up to Vadslo and the famous statue of Kathe Kollwitz on the German war cemetery: the Mourning Parents… Riding through this flat land, you certainly will feel some wind, but most of the time the endless view on rural fields, filled with cattle or cultivated land. Diksmuide and the Tower of the Yser (monument for Peace) brings us back to the story of the Great War. Next we cycle  to the St.-Sixtus Abbey where the  world famous Westfleteren Trappist is produced. Next we stop at Essex Farm Cemetery or the John Mc. Crae-site, where the poem “In Flanders Fields” was written.
Installation at the hotel in Ypres Visit of Ypres (walking tour) with local guide. Dinner is served in a local restaurant  (3 course menu, drinks not included). Night in Ypres

Day 4: In Flanders Fields tour (59  km)
Buffet breakfast
Why such a terrible thing as the first World War could ever happen? How Ypres became a ghost city, with all citizens having no other choice than become refugees… When the Germans came, local people saw their lives definitely changed… The war in the Trenches, the 4 great Battles of Ypres, the gas attacks, the Mining Explosions of June 1917, the cruelty and absurdity of the Battle of Passchendaele (summer and autumn 1917)… It is on our cycling schedule for today.
In morning we ride to the ‘Orient’, where sun rises and where the frontlines once were located for 4 long years. Tyne Cot Cemetery in Passchendaele is our first aim. A visit to the Passchendaele Museum is certainly 1 option. We ride through a nowadays green and forest-filled landscape that no longer is as flat as in the first 2 days. A bit hilly, without offering too much difficulties.
Night and dinner (3 course menu) in Ypres

Day 5: YPRES – KORTRIJK – OUDENAARDE (a taste of the Tour of Flanders) (78  km)
Buffet breakfast
Leaving Ypres following the failed canal Ypres-Leie (Lys)… Anno 1863 best engineers of the decade broke their heads on the waterway that was designed to connect the old but now poor medieval town Ypres with the Industrial Revolution. For that purpose ship traffic with the rest of the Belgian industrial cities was necessary. After 50 years non-stop attempts the project finally was abandoned. The Ypres ‘clay’ in the south-east heights made collapse the river banks and lock-constructions again and again. During the Great War, the “canal” with its artificial uplifted banks was of great strategic importance for both armies. We use the tow paths and realize this 14 km connection to the Leie (Lys) with our bicycles. Following this tributary of the Scheldt, we cycle up to Kortrijk, also an old Flemish cloth-business city with belfry. We cross the center with its towers on our bicycles – an ideal place for a lunch maybe? Little by little the landscape evolves to what is known as the Flemish Ardens. Mountains are indeed our dessert for today, before entering the capital city of the Flemish Ardens: Oudenaarde. Being the finish of the World famous cycling classic Tour of Flanders, we have a look (or even may climb) at the cobblestoned cycling Mountains, as there are ‘Old Kwaremont’, ‘Paterberg’ or the worst of all ‘Koppenberg’.
Night and dinner (3 course menu, drinks not included) in Oudenaarde

End of services
Transfer back to Brussels airport

A 6 day tour during which we discover Bruges, the coast, Ypres and Flanders fields and so many other sites by bicycle.