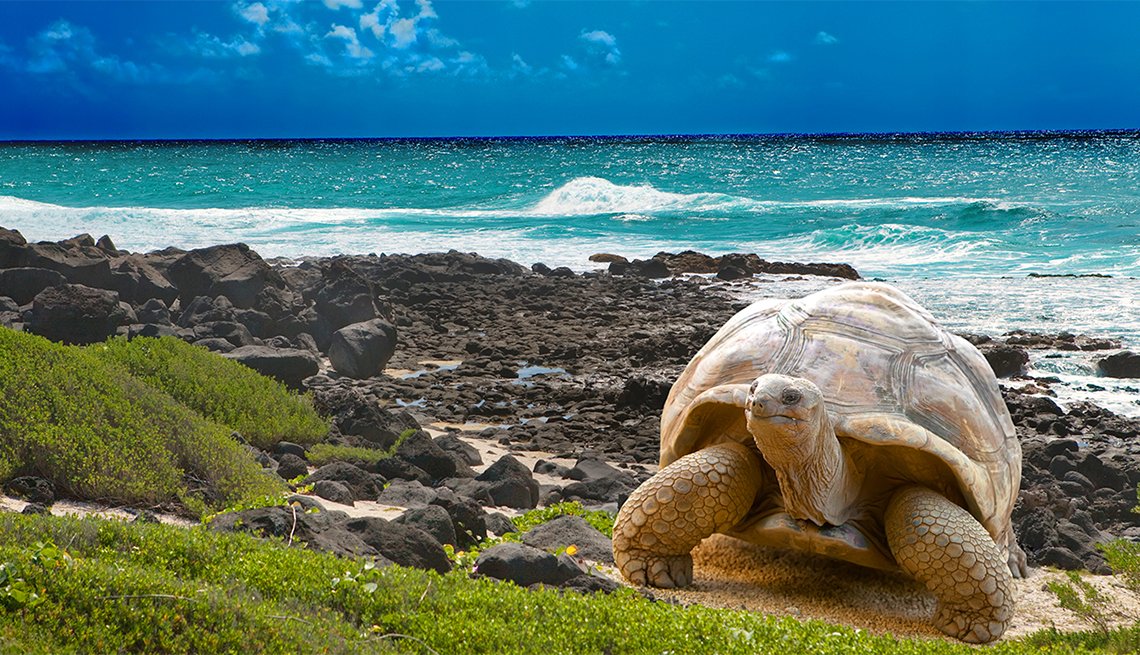 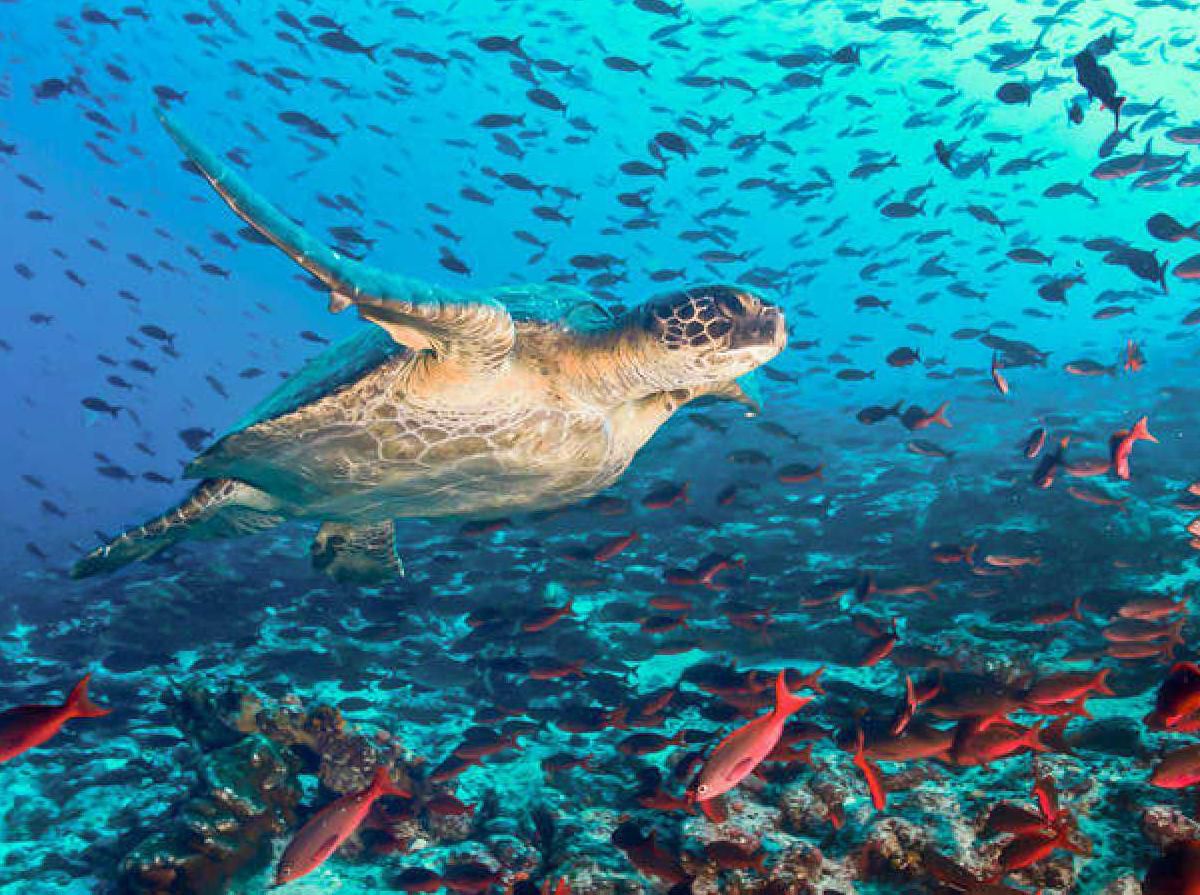 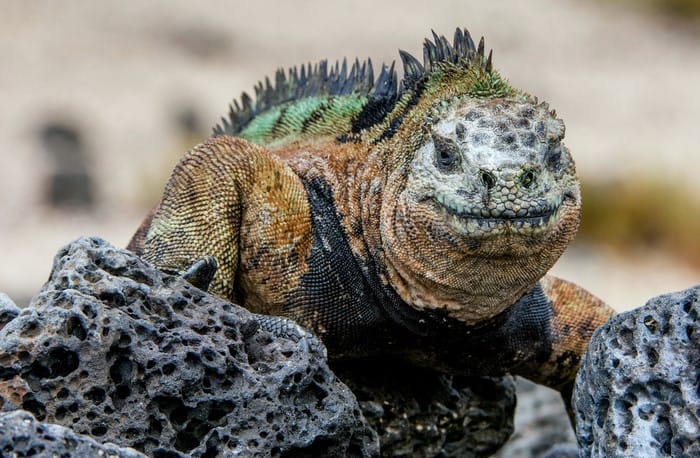 Our guide will pick you up at Baltra airport to transfer you by public bus to the Itabaca channel, you must pay USD 5 directly, after crossing the channel by ferry, we will take the transportation and take you to your hotel in

Puerto Ayora. The excursion to the highlands gives you the opportunity to see the giant turtles in their natural habitat, and also enter the lava tunnels.

After breakfast the day begins with a tour of the Bay, we will visit the “La Lobería” Island, named for the great colony of sea lions where you can snorkel surrounded by sea lions, it is a very special place to observe a variety of goldfish, diversity of seabed species.

Then we go to Punta Estrada you can see animals such as seagulls, boobies, frigates, sea lions, etc.

Visit the Sharks Channel, where you can see sharks and from the viewpoint you can see the port and the mountains of the upper part of the Island. Visit Playa de los Perros to observe a marine iguana colony and a scenic view. Our last visit; it will be in the Cracks where this landscape is formed by interesting lava figures that form two gigantic walls crossed by a brackish water arm and that is mixed with seawater and recommended for swimming and surface diving, for the transparency of its water. Lunch.

Transfer from Santa Cruz by speedboat to Isabela Island, after approximately 2 hours and 30 minutes arrival at Puerto Villamil by arrangement of the local municipality, the dock use fee must be paid in cash.

The Sierra Negra Volcano is considered the oldest of the Isabela volcanoes. According to some geologists, including Nordlie, the wider and less deep a boiler is, the older it is. This conclusion is reached through a theory and observations that indicate that the volcanic processes in a caldera tend to tear down its edge, filling it. This activity is characterized by tremors and eruptions that are occurring over the course of thousands and millions of years. The youngest volcano is Cerro Azul, followed by Wolf, Fernandina, Darwin, Alcedo and Sierra Negra. This area is extremely active, having recorded three volcanic events in the 90s: two in Fernandina (91 and 95) and one in Cerro Azul (September 1998). The Sierra Negra caldera is 10 km in diameter and is the second largest in the world. Chico Volcano is located northeast of the Sierra Negra Volcano at an altitude of approximately 860msnm. There is a pedestrian path and a path for horse riding, which are clearly signposted.

Chico Volcano is a fissure of some parasitic cones, composed of slag and lava, is located northwest of the caldera, so it is not affected by the garúa that always precipitates in the southeastern sector of the high islands.

This is one of the reasons why Chico Volcano is in perfect condition and can also be appreciated by visitors when there is good visibility and sun.

This tour lasts approximately 5 to 6 hours, the same as its departure at 8:30. The duration of the trip to the first place of visit is 30 minutes of which, along the way, you can see giant manta rays and sea turtles on the surface, When you arrive at the first visit site called Roca Unión we can observe different species of birds such as: blue footed boobies, masked boobies, seagulls, pelicans and sea lions.

The duration of the snorkel is approximately 2 hours. It can be easily observed volcanic formations of black lava in the form of arcs in the sea and varieties of species such as: sea turtles, shark sharks, and eagle stingrays, and skillet manta rays, seahorse schools of fish and penguins of Galapagos.

There is also a 25-minute walk where the guide will explain the arc formations that exist in the place and enjoy the Blue footed boobies and an unforgettable landscape.

Lunch Transfer on board a panga.  The access is easy and people can disembark both at low and high tide. The approximate travel time from Puerto Villamil to Las Tintoreras is 10 minutes.

The islet Las Tintoreras is located south of Puerto Villamil. It has a small bay of completely calm turquoise waters, where you can see sea lions, sea turtles, sea iguanas, rays, etc. This bay is connected to a crack of crystalline waters, shallow and when the tide is low, the entrance is closed. In this crack, you can see how the dry cleaners swim along with other small fish and sea lions. Most of the trail is lava type AA, with the exception of two white sand beaches and one of black stones. On the first beach there are colonies of sea lions; In addition, it is a nesting site for marine iguanas, so during the nesting season.

On the first beach you can see some endemic plants and the second beach is surrounded by mangroves, jelí and white. Throughout the trail you can see many marine iguanas between the rocks or under the mangroves. The Tintoreras is one of the few places where iguana breeding is successful due to the absence of introduced animals that could kill young.

Very early in the morning transfer by speedboat to Santa Cruz Island. After lunch (on our own) we will visit Tortuga Bay Beachbest known because of being a nesting beach for the black turtle. One of the longest white sand beaches. Marine iguanas, sharks and sea turtles can be seen on this site. Return to the hotel.

Scheduled transfer to Baltra airport, the pick-up will depend on the confirmed local flight time, return to Quito or Guayaquil.

These itineraries are designed by travelers for travelers, to share authentic experiences that stimulate learning and exchange between cultures. We are committed to constant innovation and measuring the impact of our actions to allow future generations to enjoy the privilege of traveling and discovering.