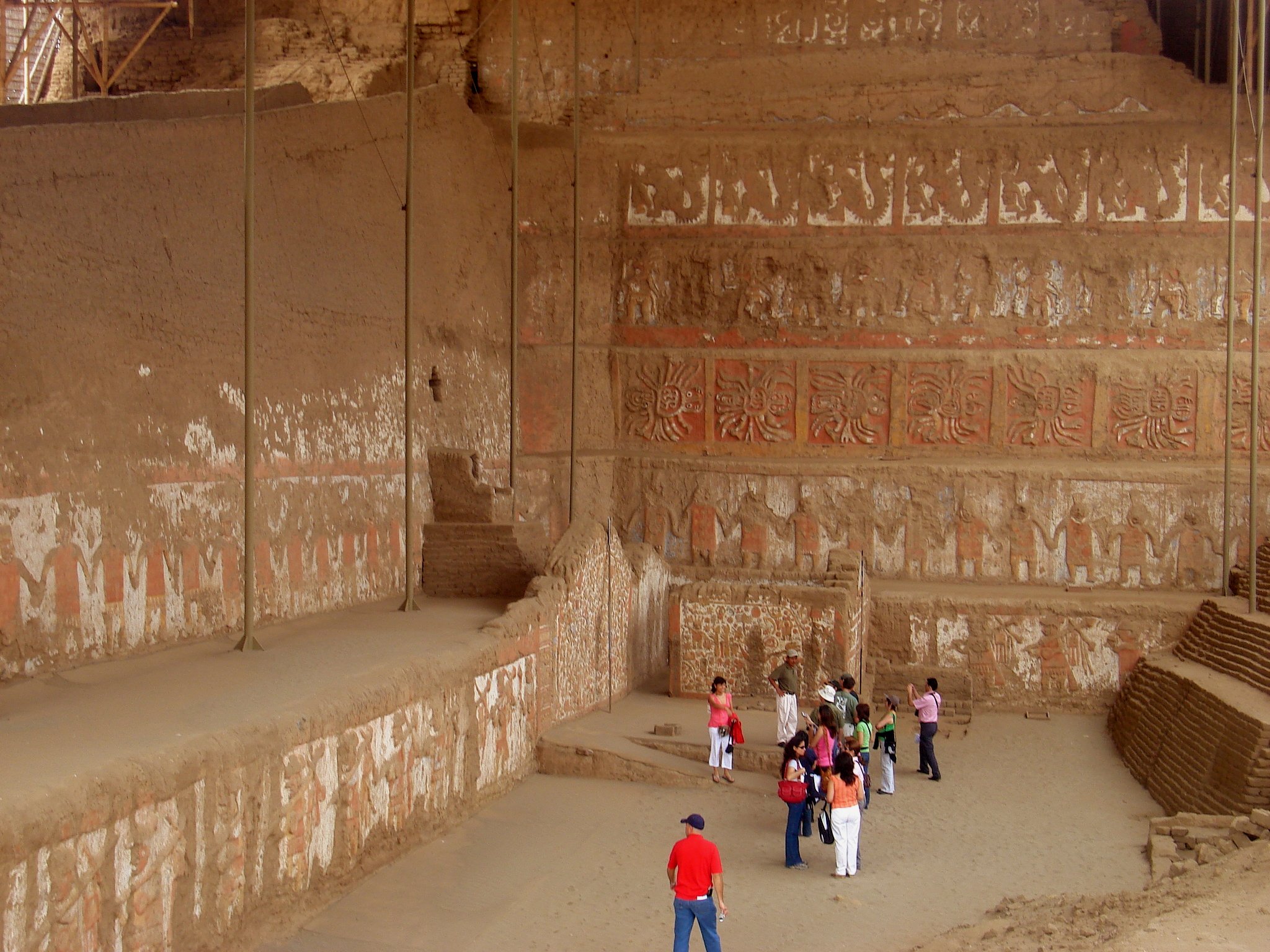 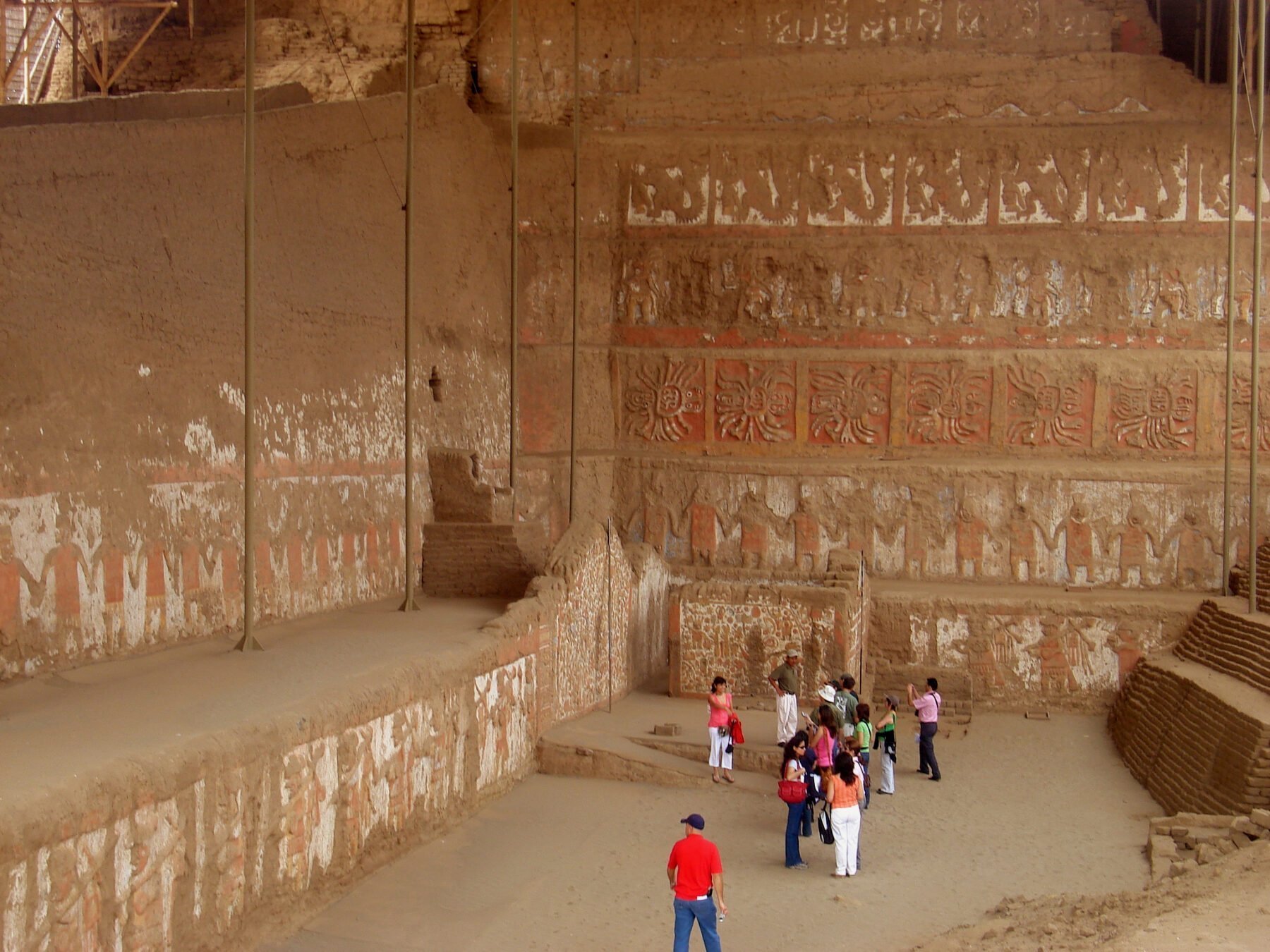 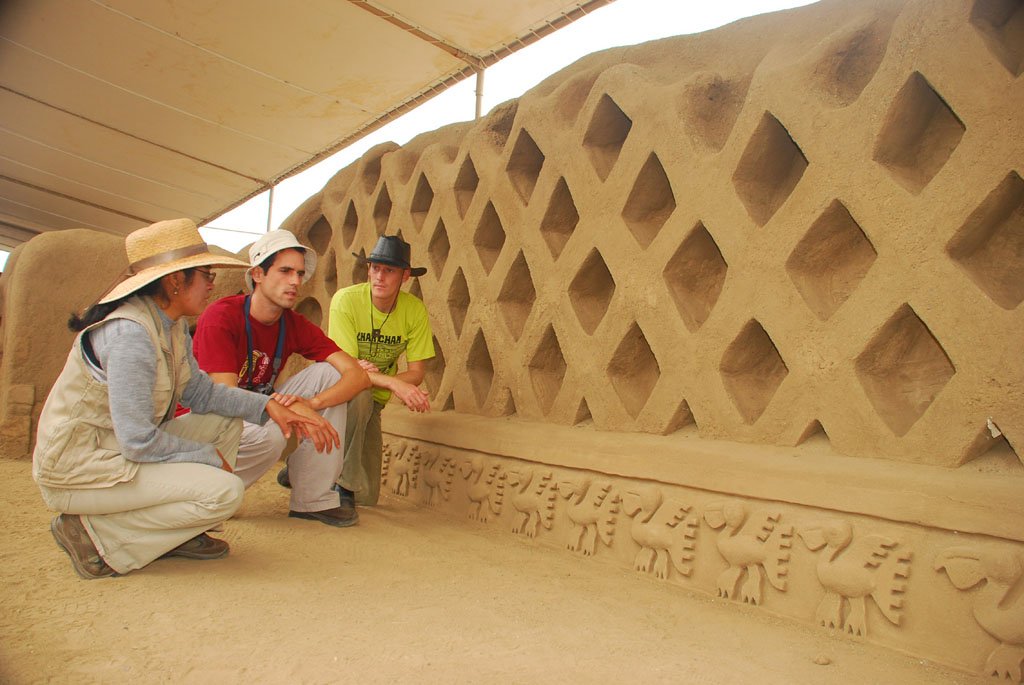 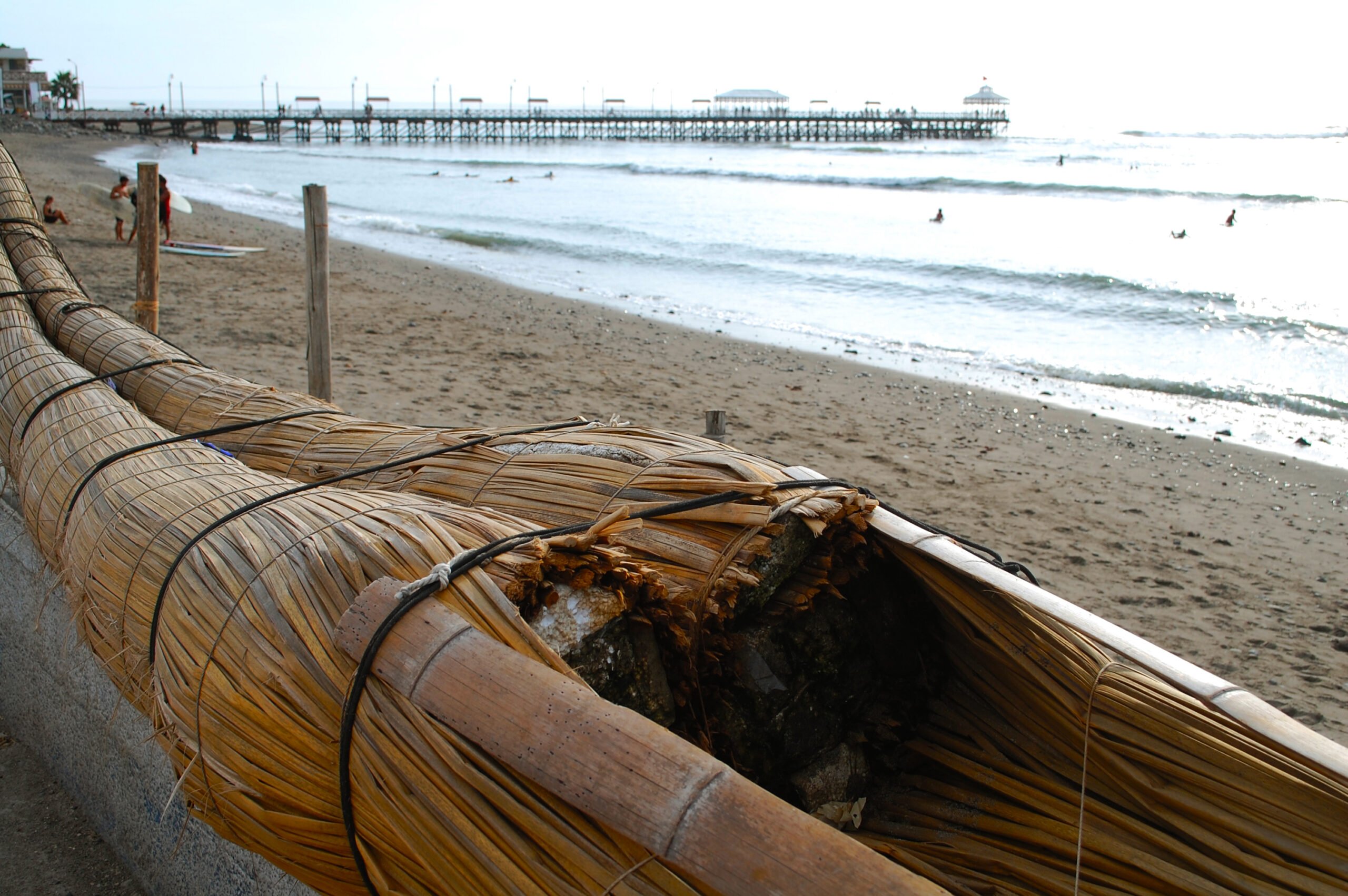 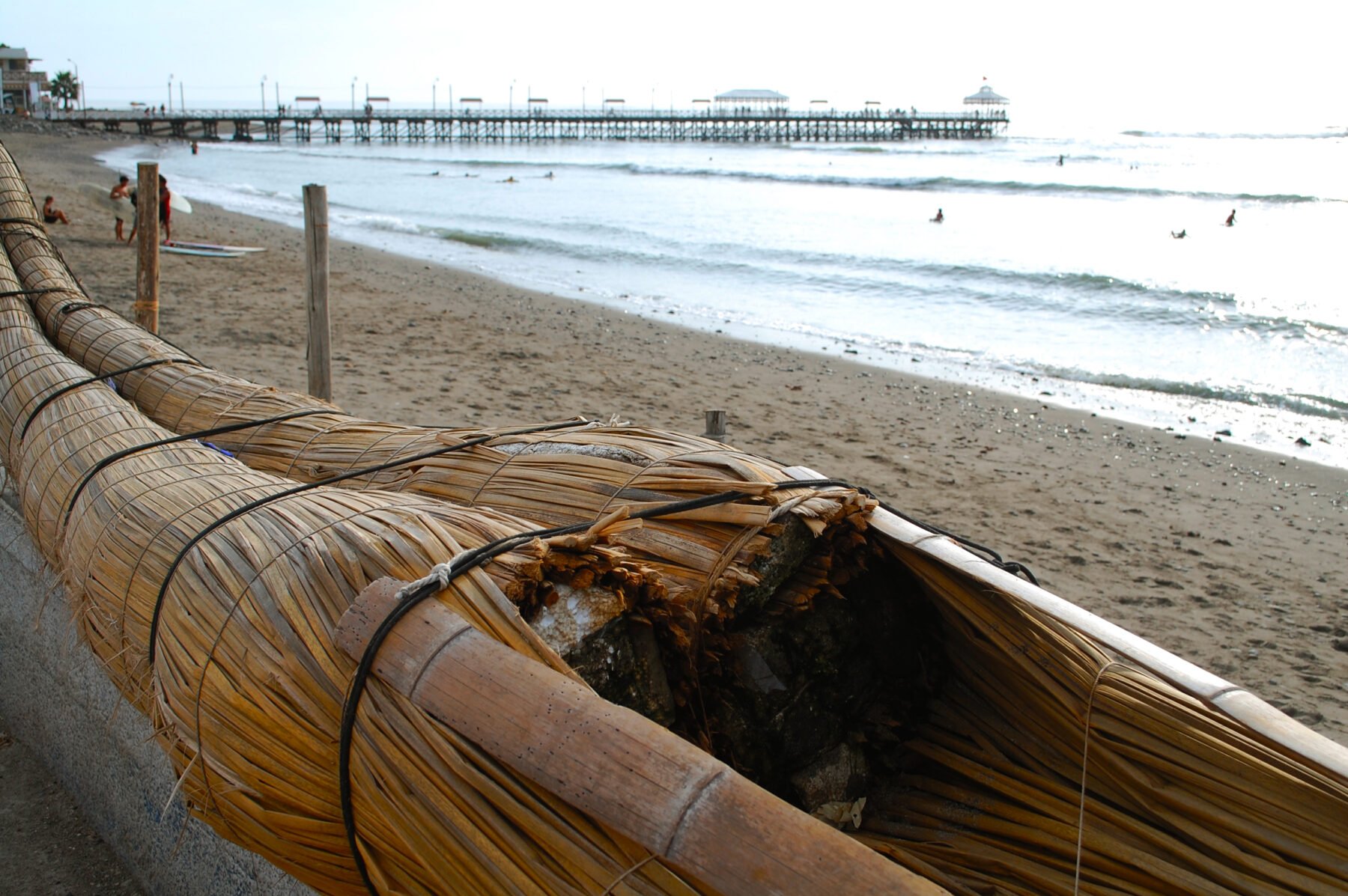 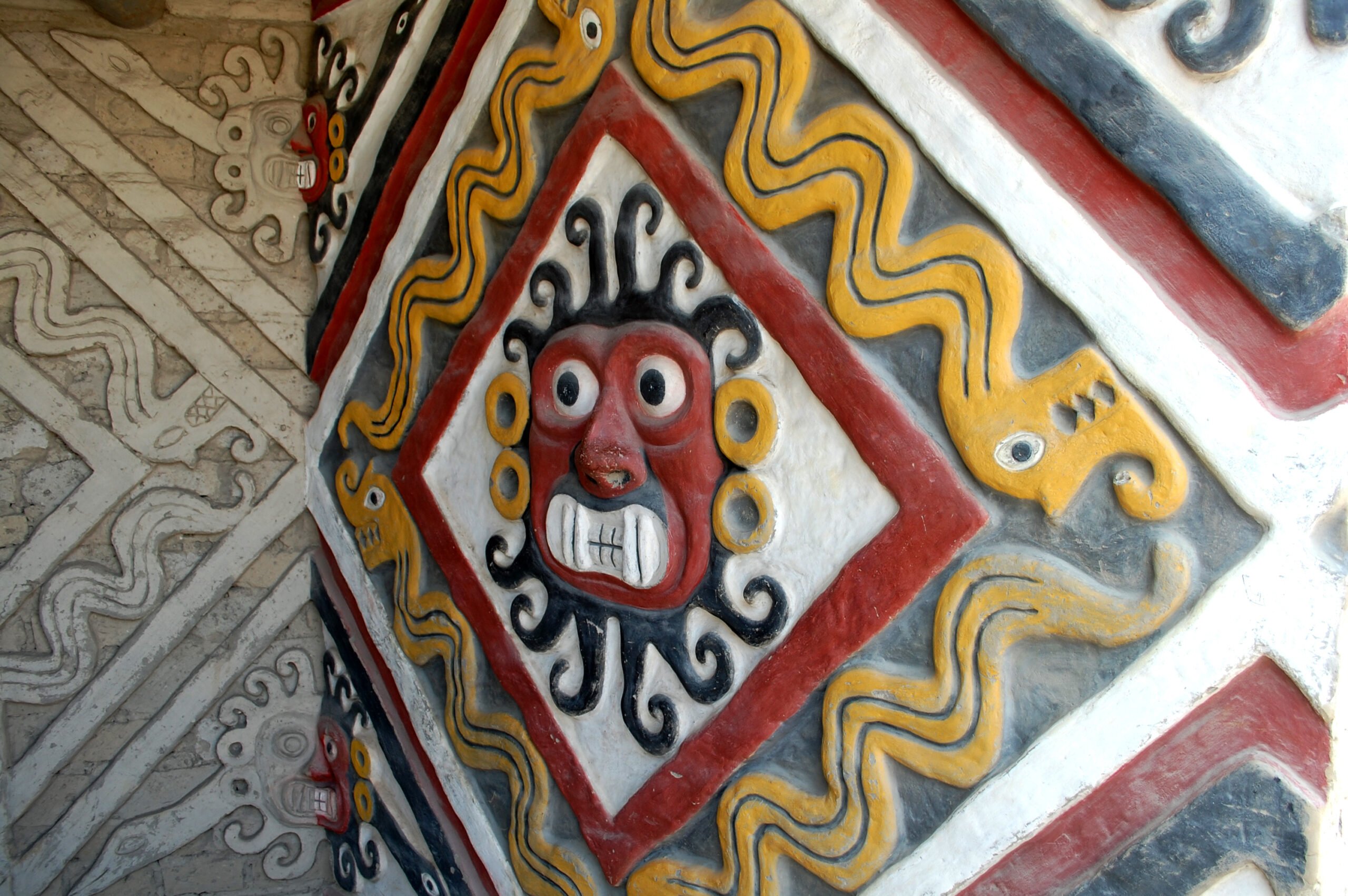 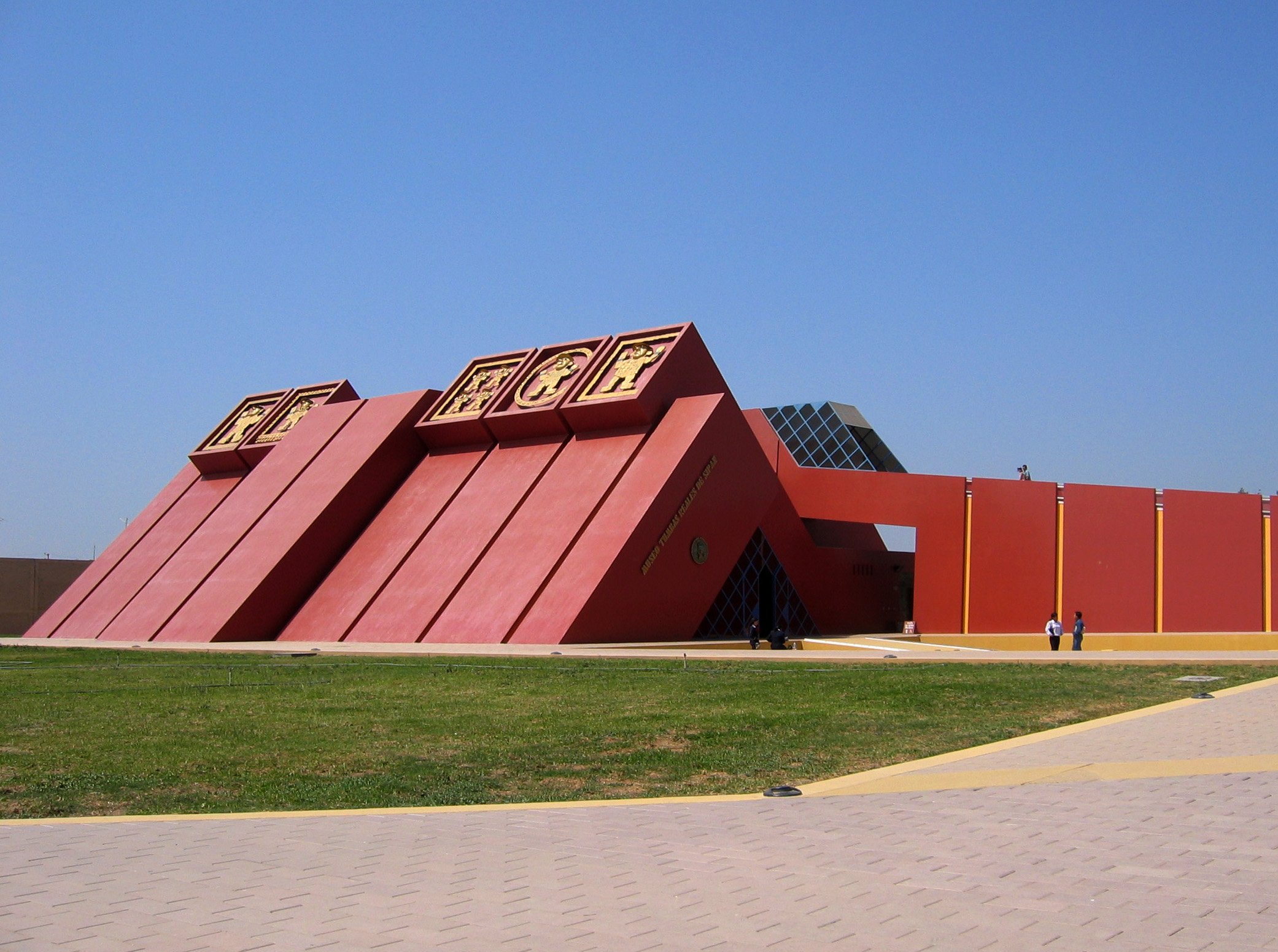 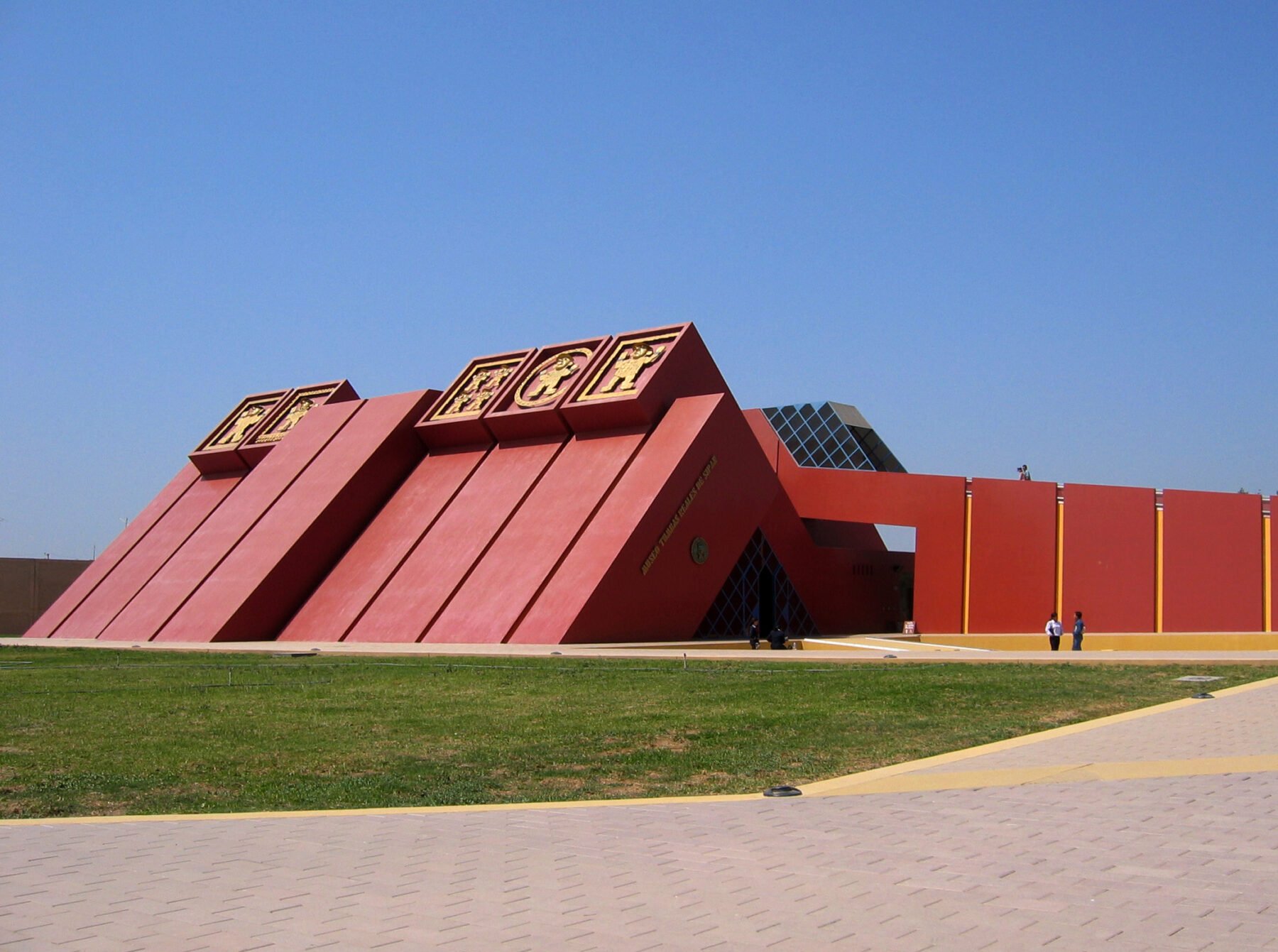 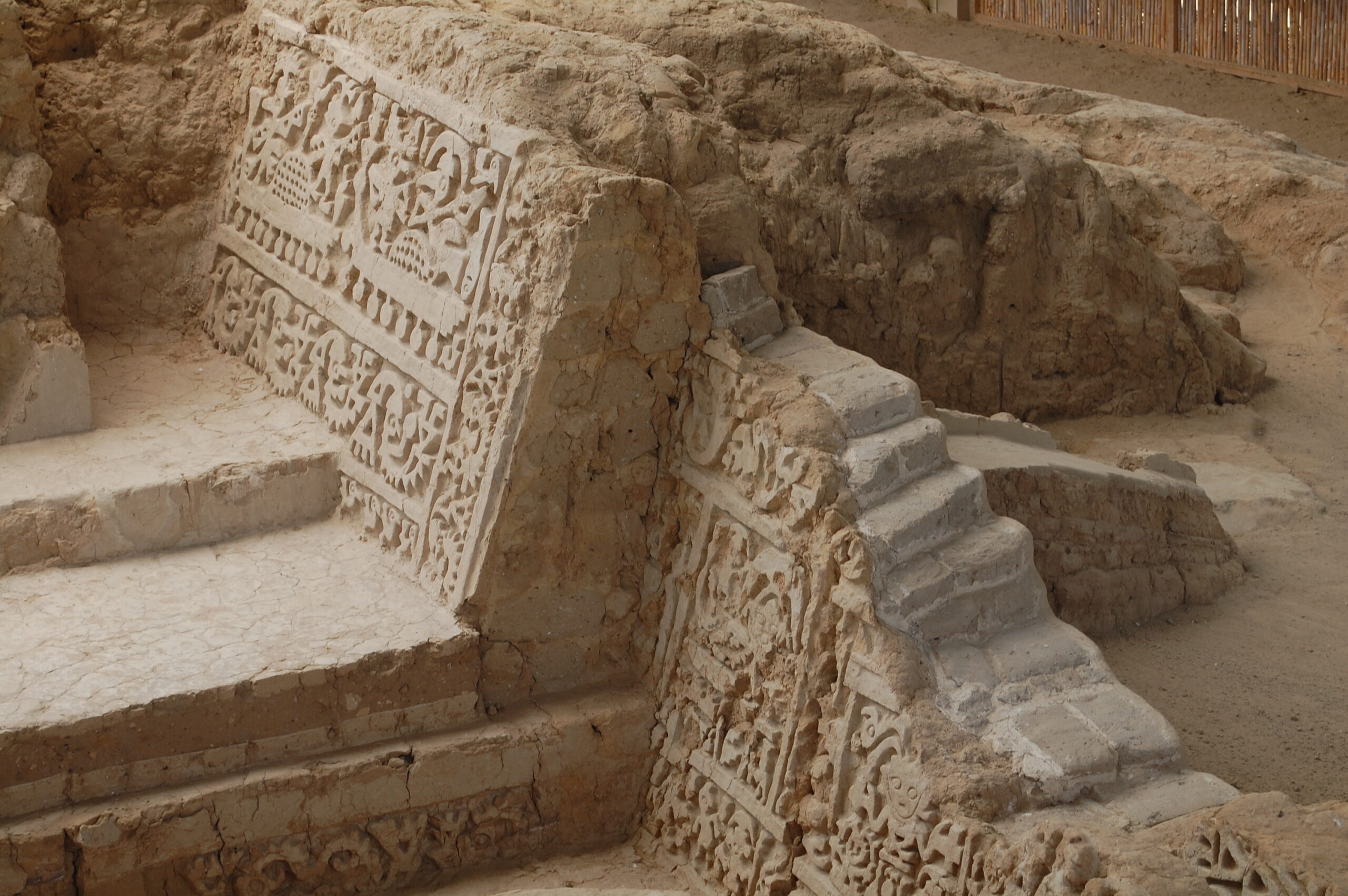 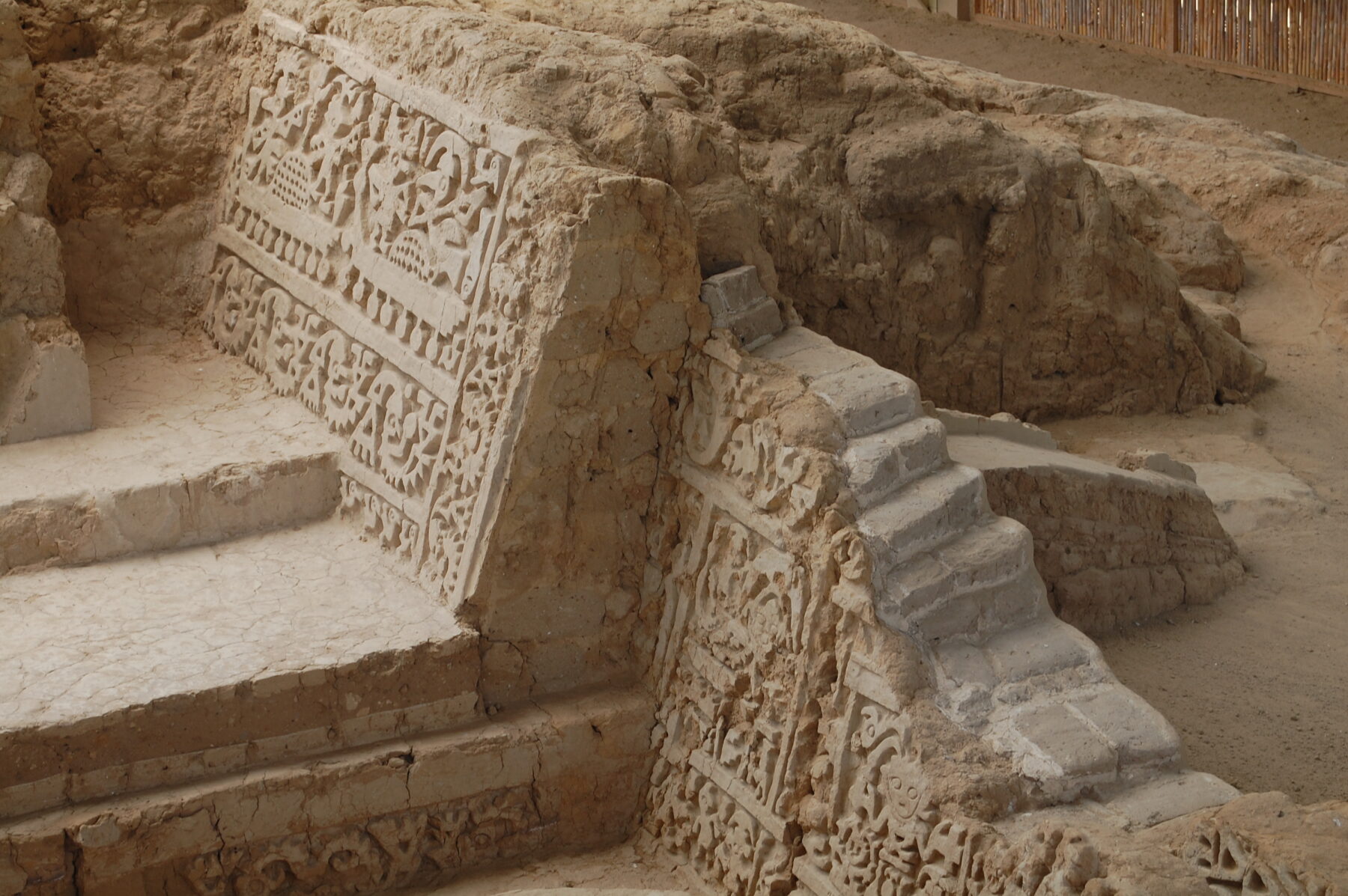 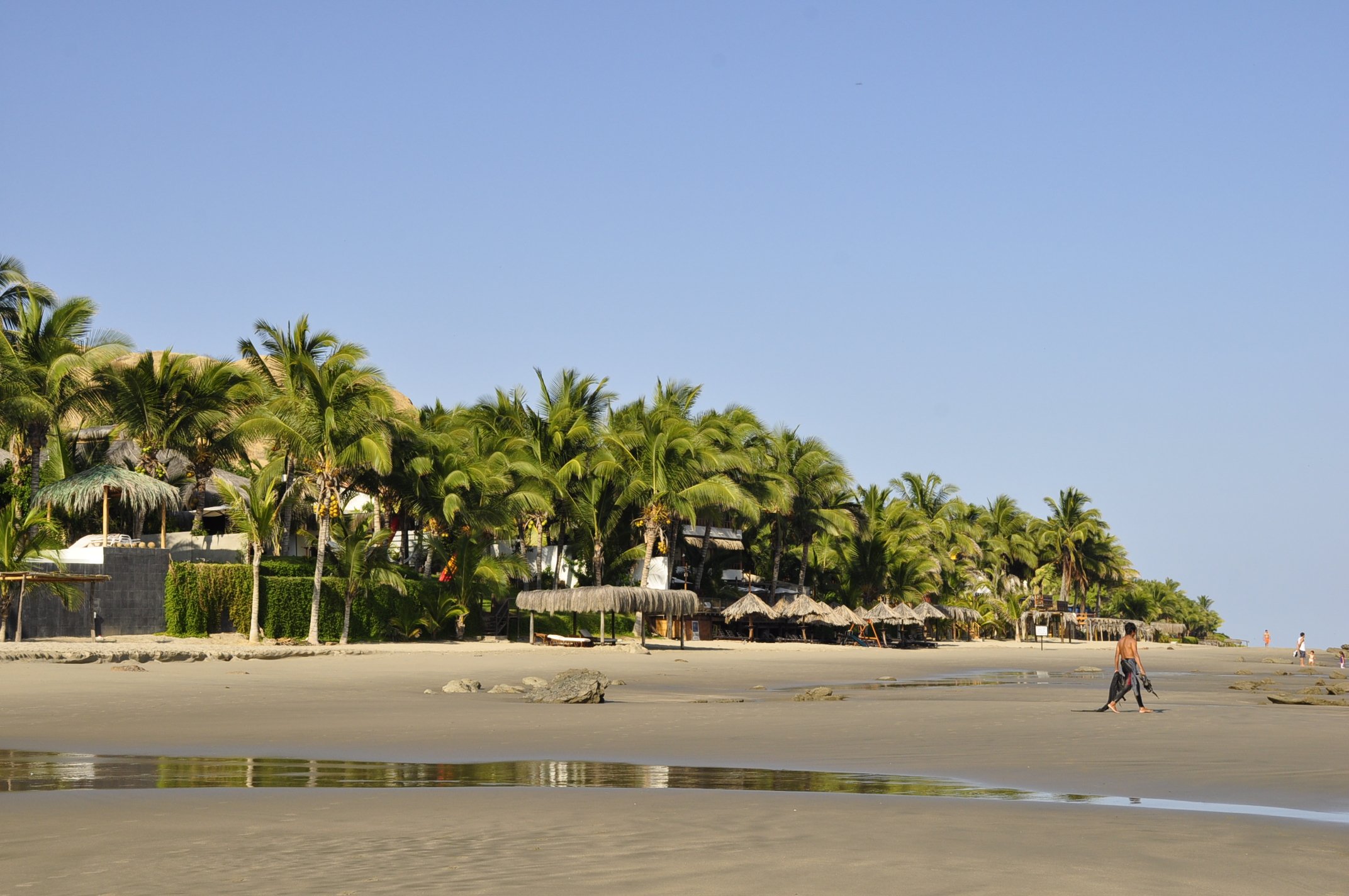 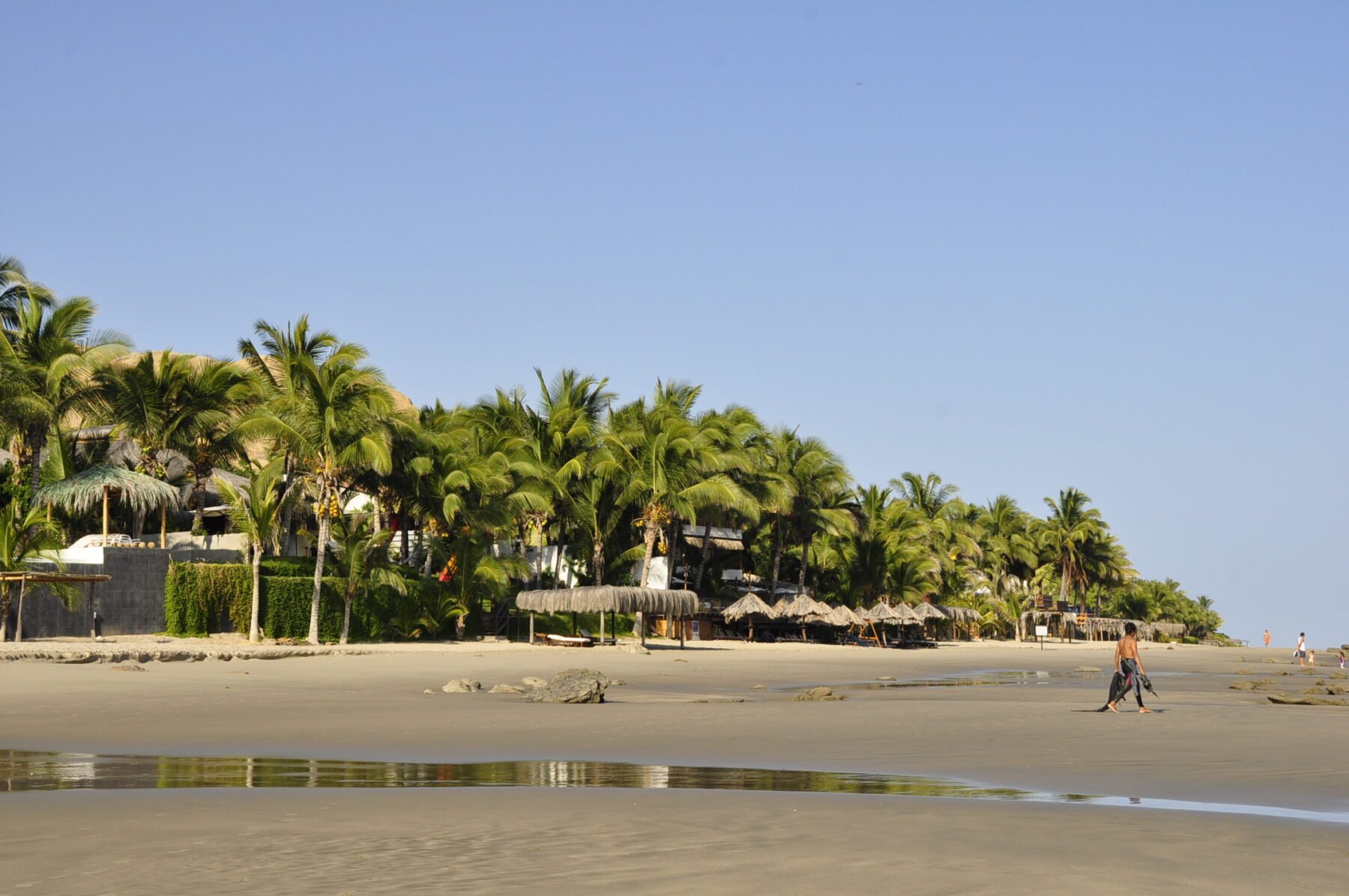 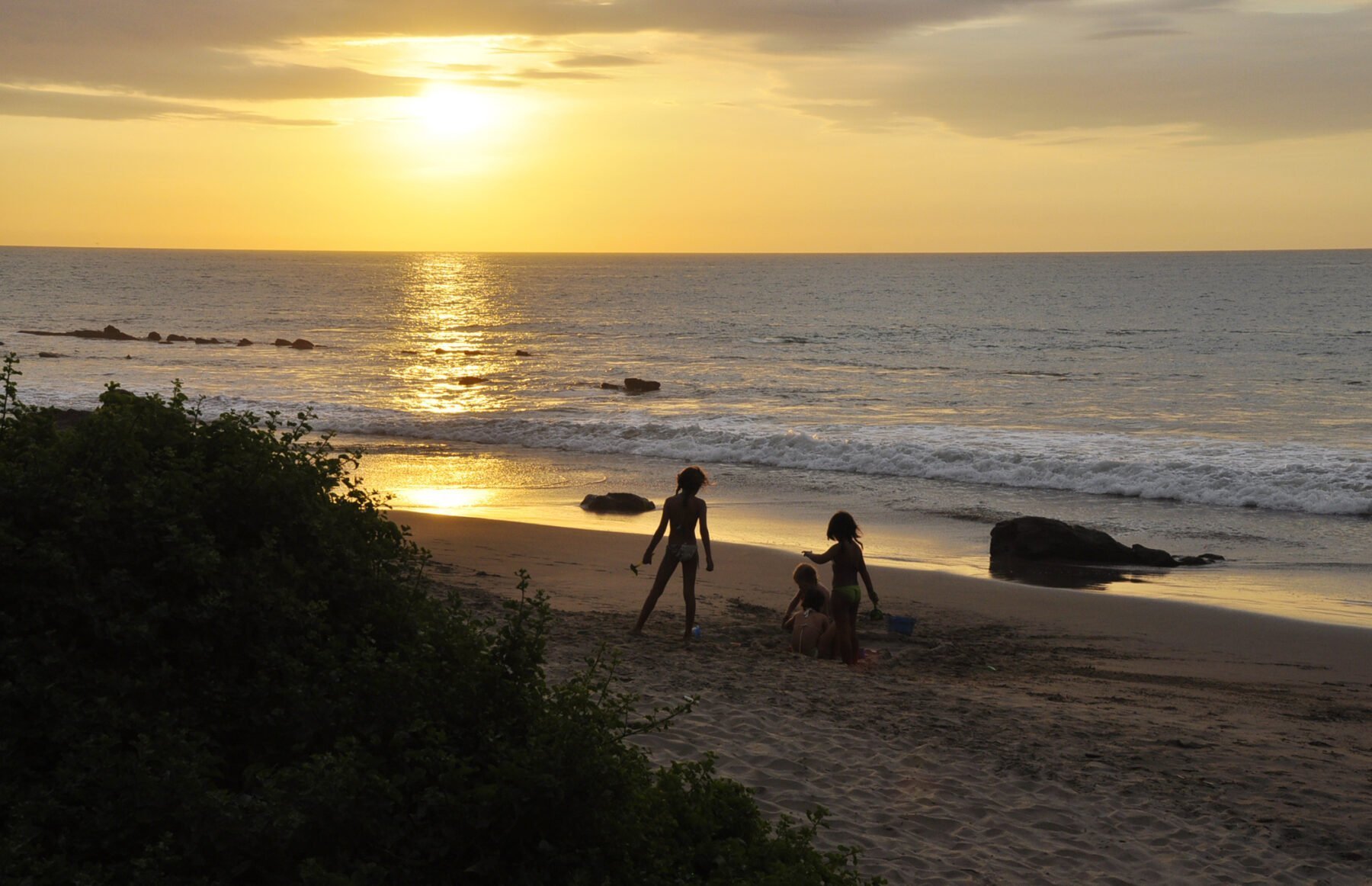 DAY 2 TRUJILLO
(Meal Plan: Breakfast)
Today you explore Trujillo’s archaeological and cultural heritage on a full-day tour. The Temples of the Sun and Moon played a major role in the Moche civilization (100 900 AD). The finely decorated Temple of the Moon represents the spiritual center for the Moches. Some of the walls feature multi-colored murals depicting scenes in which they were shown to be a war-like community. As you stroll through the Temple of the Moon you will get a panoramic view over the Temple of the Sun – considered to be one of the largest adobe structures in the Americas. The adjacent museum displays artifacts uncovered in the temples. You then stop at Huanchaco, a charming village where the ancient tradition of fishing from reed watercrafts is still maintained and practiced. In Chan Chan, your guide will introduce you to the capital city of the former kingdom of Chimu culture (1200 to 1470 AD). This enormous archaeological complex, covering an area of 18 km², was the largest Pre-Columbian mud city in South America and remained the capital of the Chimu civilization until they were conquered by the Inca in the 15th century.

DAY 3 TRUJILLO – CHICLAYO
(Meal Plan: Breakfast)
Prepare yourself for an insightful tour through Trujillo’s historic center. Peru’s third largest city and the first of which founded by Spanish conquerors who built it next to the former capital of the Chimu Kingdom (1200 – 1470 AC). During this period, Trujillo developed its own architectural style which can be seen in its gracious houses that feature ornamental ironwork around its windows. Your tour includes a visit to one of these unique mansions – a ‘must-see’ in the city that contains Peru’s greatest collection of colonial homes.

Journey in private vehicle from Trujillo to Chiclayo (approx. 222 km/138 miles). En route, you make a detour and visit the ‘El Brujo’ or ‘Witch Doctor’ complex. This designation is owed to the fact that for hundreds of years healing masters congregated here in order to perform shamanic rituals. This archaeological complex comprises of three pyramids, namely, Huaca El Brujo, Huaca Prieta and Huaca Cao. The latter of the three being the only one which can be visited, and it was here that a well preserved mummy of a woman and a rich array of funeral objects including fine jewelry and weapons were found in 2006. You have the chance to see Huaca Cao’s multi-colored friezes and reliefs featuring the Moche deity Ai Apaec, warriors, prisoners and sacrificial scenes. The local museum displays the mummy, said to be the first known female ruler in Peru and baptized as ‘The Lady of Cao’. The museum also showcases objects from the different cultures that settled in this area, documenting 5,000 years of history.

DAY 4 CHICLAYO
(Meal Plan: Breakfast)
You spend the morning with an exploration of Chiclayo’s highlights, including the cathedral, city hall and a visit to the ‘Mercado Modelo’. Renowned for its ‘section for witches’, the market offers everything necessary for shamans to practice their profession. Different kinds of herbs, amulets, bones and animal parts among others can be found in the market’s stalls. The visit is an interesting cultural experience that complements your archaeological explorations of the region.

In the afternoon, explore the sacred Chotuna Archaeological Complex in a 3-hour, half-day journey through history. Considered to be the birthplace of the Lambayecan culture and located 18 km/11 miles from the city of Lambayeque. You will be collected from your hotel and taken through to Chotuna. Once you arrive, you will spend 1.5 hours in the complex, where you will tour the fascinating archaeological zone, explore Huaca Chotuna and visit the onsite museum. You will learn about the legend of Naylamp, browse through the different Lambayeque artifacts unearthed during excavations and view a reproduction of the main facade from the temple which depicts five double-headed snakes along with iconography of fish, birds and snakes. Once you are done you will be transferred back to your hotel

DAY 5 CHICLAYO
(Meal Plan: Breakfast)
Your half-day tour begins with a visit to the Museum of the Royal Tombs of Sipan, shaped like a Moche pyramid and considered to be one of the best archaeological museums in the country. The collection contains the gold masks, scepters, jewelry and other objects from the royal Moche tomb discovered 1987. The exhibition succeeds in evoking the magnificence and high degree of development of the ancient Moche civilization (100-900 AD) which is hard to imagine when exploring the eroded adobe pyramids. You will also explore Tucume. This area was a majorly populated center, perhaps the capital of each of the successive cultures of the area, the Lambayeque/Sican (1000/1000-1350 AD). From the lookout on Cerro Purgatorio, you can enjoy panoramic views over the entire complex, embracing 26 eroded adobe pyramids. The local museum displays photographs and artifacts from the excavations. Afternoon at leisure.

In the evening, transfer from your hotel to the bus station in Chiclayo. Your journey takes you on a regular tourist bus from Chiclayo to Mancora (approx. 393 km/244 miles, no guide service). Overnight on the bus.

DAY 6 MANCORA
(Meal Plan: Breakfast)
Peru is not necessarily known for its beaches, but, when looking for some rest and relaxation, there are a few stunning coastlines which are synonymous with this, beaches such as Mancora. Your hotel has direct access to the beachfront – considered to be one of Peru’s most picturesque. Its small size gives it an intimate feeling. Your hotel stay includes an ocean-facing room. Bring a good book, a cold beverage and stick your toes in the sand, enjoy your disconnection from everyday life and embrace the tranquil setting with peaceful views over the ocean.

Upon an early arrival in Mancora, you will be transferred from the bus station to your hotel (early check-in is included in the price).

DAY 9 MANCORA – TUMBES
(Meal Plan: Breakfast)
Free morning at leisure. Afternoon transfer from your hotel in Mancora to Tumbes airport for your flight to Lima.

Travel through time as you explore Pre-Inca archaeological sites uncovered in the last years along the northern coast of Peru and escape from mass tourism. After a trip filled with discovery and adventure in one-of-a-kind findings like the Lord of Sipan or the Lady of Cao, enjoy your well deserved rest and relaxation at the picturesque and tranquil beaches of Mancora.